******** NEW FEATURE ********
Executive summary for those with the attention span of my children:
Weather sunny and hot, trails dry and dusty, descents scary as ****.
Best XC course ever. I love Margam! 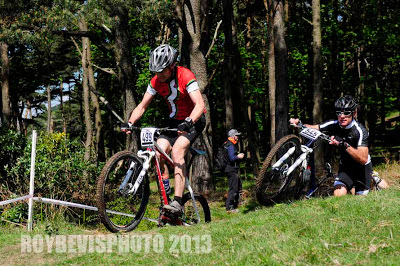 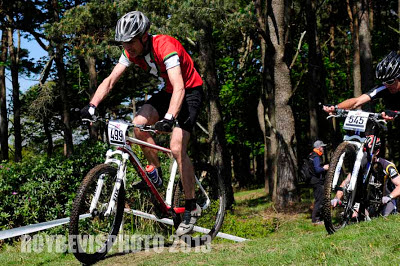 But who got up the hill?
All photos with ROYBEVISPHOTO on them courtesy of Mickey Mouse, d'uh.

So basically it was good. Very good. But things weren't looking too good beforehand...

Wot no wheels
After the Dyfi Disaster I went surfing for a new rear wheel and found a nice set of tubeless-specific rims on good hubs set up tubeless with nearly-new tyres going second-hand for much less than a half-decent rear wheel new. Perfect. Except: "Parcelforce say the label came off..." And then: "Parcelforce can't find your address on their system..." Cue frantic tearing out of what little hair I have left. They eventually turned up the day before the race. Too late for a test-drive or tyre change, but at least I was tubeless. I hate inner tubes. They are without doubt the work of the devil.

Wot no dropper
After fitting the new wheels and offering a long prayer that the rear wheel would stay on properly (long, boring saga to do with chain tugs), I was giving the bike a quick pre-race wash (like you do, it's a bit like adding go-faster stripes to your car) and it struck me that the reason why my number board is always wonky during races was because the cable to the dropper post was routed wrongly. So I unscrewed the handlebar switch, moved the cable, screwed the switch back on - and snapped the clamp. Oops. No way of activating dropper post. No time to get a spare clamp. No dropper post at Margam. Yes, that Margam, the one with the crazy steep descents where a high saddle is liable to rip your bollocks off at any time. 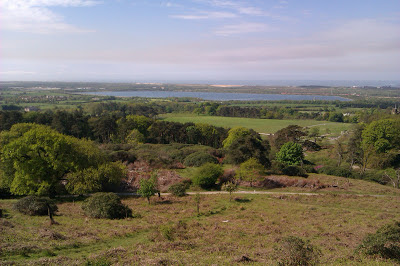 In light of all this, I decided to get to Margam early and do a gentle practice lap to test my equipment. I wouldn't normally bother (I'd rather stay in bed) and I'd done most of the course nine times before, but I wanted to try going round with the saddle jammed up my arse without the pressure of other riders around me. And I'm very glad I did.

Wot no balls
Ambling up the big climb, enjoying the sunshine and taking pictures of the view on my phone, I tried to snap some riders coming down a little extra section added at the top. Looked a bit steep, but nothing to worry about.

Only then I got to the top myself and looked down... Plenty to worry about. No way was I going down that. The start didn't help, with a tight left turn round an awkwardly positioned mound and then what looked like a sheer drop for about 20 feet before easing out slightly and then swinging sharp right at the bottom. The path, for want of a better word, was less than a foot wide, far from even and littered with random loose rocks along its length, lying in wait ready to grab your front wheel and catapult you over the bars to your doom.

Problem was, there was no chicken line and it was too steep to run down. It had to be ridden. I traipsed back along the trail to get a decent run-up, got to the edge and... stopped. I was petrified. It looked impossibly steep. Certain death. Partly, I suppose, because the hill carries on down well beyond this actual section, and it seemed like you could end up somersaulting all the way down to the sea. I honestly don't think I'd ever have done it - except a girl then arrived at the top of the hill to recce the drop. There was no way I could not do it now. Sad, I know. But I can't help it.

I said it didn't look much from underneath.


So over the edge I went. I completely missed the line and went down about six feet off to the right through grass and bracken, desperately trying to avoid big chunks of rock lurking in their midst. Total panic time. I shifted my weight as far back as I possibly could. Too far back. Now the saddle wasn't under me but in front of me, somewhere around my navel. Double panic. Drop any further back and the rear wheel would chainsaw off my wedding tackle, while any sudden movement forward would leave my nads dangling off the back of my saddle. Two children are more than enough, but even so...

Of course, I made it down intact. I bumped into race organiser Scott Bugden and octogenarian MTB legend John Lloyd a little later. Scott said: "Take the inside line at the top and you'll be laughing." John said: "It's really not very steep, it doesn't warrant a dropper post, just man up." Only more politely.

I went on to ride that section six times during the race and didn't fall off or sever my testicles once, which was nice. As usual during a race, they did their best to hide, which helped, and I must confess I also dropped my saddle an inch below normal height before the start just in case. I never managed to take Scott's line, which was even steeper than the more obvious one. But John was right, it wasn't that steep in the end. I did just need to man up. On the final lap I even managed to relax - a bit - and feel a degree of control. Quite a few people did come off there during the day though and will forever bear the scars to prove it. 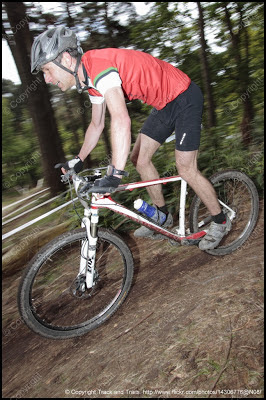 The fast bit in the woods. Photo: Blood, Sweat and Gears.

Next up on my practice lap was the rooty section that defeated me in the wet in February. Easy. Plenty of grip from the tyres, just needed enough oomph to get over the last big fat root at the top. And then the steep loose rocky chute. As usual, hang on and pray. Again I struggled to relax into it but made it down in one piece every time. Ditto the bobsleigh run down through the rhododendrons, careering from side to side and willing the bike to go in the right direction, which it more or less did. Last time I had rigid forks, whereas this time I had suspension; I have to say the descents felt no less rough, but Strava tells me I was a bit quicker.

With the ground being so dry, the impossible climb from February was also now possible, though I only bothered riding it on the last lap, just for the hell of it. Another new section took us down a hill on woodchip, which was novel and soft and slidey and fun, and then it was back through the not-so-muddy woods to the start.

All in all, a dry, fast, grippy, scary monster of a roller-coaster ride. I couldn't wait. 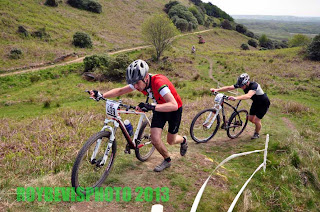 Another place gained on foot... 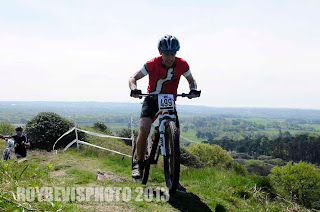 But clipping back in can be painful! 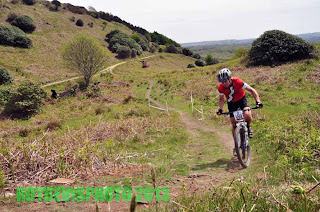 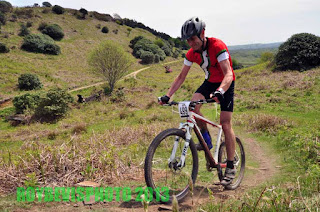 
And the race itself? Not much more to say really. Same course, faster, lots of times. Sunny, hot, sweaty stuff, lots of fluids needed. I had vague plans to really go for it up the first hill and then see if I could stay on the tail of eventual winner Mark Spratt, but the pace off the start line was fearsome and I had no chance of keeping up on the flat without gears - indeed I probably would have struggled with gears. By the time we hit the singletrack climb I was maybe 50 yards adrift of the first dozen riders. With a bit of grunt, I managed to close this gap before getting to the top, which also meant I pulled away from the riders behind me, allowing me to tackle the Descent of Doom in my own time and space. I duly survived but then lost ground again on the leaders due to first-lap schoolboy errors on the roots and never saw them again. To be honest, looking at their times, I never stood a chance. 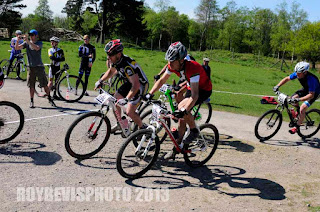 Starting in pole position didn't help much on the singlespeed.

It was very hot out there, and by the end I was beginning to cramp and feeling pretty tired. As usual, I walked the steepest climbs to conserve energy, but I gained quite a few places riding the other climbs, so if I could only build enough strength to get up the steeper climbs comfortably... Or get some gears... Hmm... 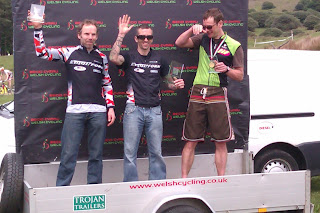 No place on the glory trailer for me. (Maybe my fashion sense just didn't cut it. Miaow.) Winner Mark Spratt is the one standing in the wrong place doing a Robbie Fowler.

I ended up 7th in the race and 4th in the Welsh Championships, so no medal this year... It's ironic that after two years taking bronze despite having terrible races and getting lapped, this year I finally have a problem-free race, I'm stronger and fitter and faster and less technically inept than ever, and I don't make the podium. But fourth is still pretty damn good and I enjoyed the race more than I can possibly say. 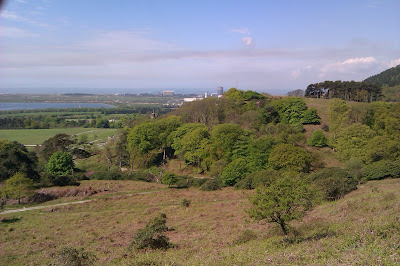 So, what next? Apart from the odd dabble in the Red Kite summer midweek XC series it's time to have a rest until the autumn, when I hope to have another go at last year's two highlights, the Brecon Beast and, of course, Margam Madness. But after today, it'd be hard not to do the third round of the British National Series also at Margam on 7 July... And the stupidly long Red Kite Elan Valley Challenge on 23 June is also whispering sweet nothings in my ear... Spoilt for choice this year... Need to exercise some self-restraint... Yeah, right...

Welsh Champs - 4th
No medal this year but well beaten by the first two. Next year, Mr Porter...


On the day - 7th
Way off Mark Spratt's blistering pace but check out the consistency of my lap times... I clearly wasn't trying hard enough!