Sadly, the turnout was even worse than last time - unless you count the midges. They were legion.

Rather like Jonathan Pugh in the winter XC series (and pretty much every other XC race in Britain this year), I knew from the start that I had the beating of the others, so I didn't push myself very hard. That said, there was always that niggling doubt, so I kept going at a fair pace.

The course was mostly familiar, relatively flat, fast and fun. A short fireroad climb (well, shorter than normal) took us onto a surprisingly tricky muddy logging track. The big question here was whether to ride the ruts and gamble on the depth of the puddles, or slip and slide along the narrow hump in the middle. The answer in practice was a bit of both, often at the same time.

Next came the really steep and slippery descent from the last round of the winter XC series. I found it too much back then, but with a new bermed entry, a bridge over the stream at the bottom and the soil now more sticky than gloopy, it was very rideable - and a lot of fun. It was still very steep and slippery, though, so I took it quite slowly, using my hips to steer, sliding the rear wheel around the turns, and actively trying to remember to look ahead and ride above the line over the odd off-camber root. I wouldn't say I was a descending god, but I did OK.

Then it was back down to the café, a quick blast around the bottom loop with second stream crossing to guarantee wet feet, another little climb and the final flowing descent to the finish. Nothing too demanding, but just about right for my first rigid ride for months, and a low-flying fir branch with bright green fingers of new growth added a real rollercoaster feel for taller riders at least - that bit when you race back down towards the tunnel and you're convinced you're going to be decapitated.

So, five lots of that and then, right at the end, an epic sprint on the final climb to catch Donna Morris, who really didn't want to be lapped. Boy, that hurt, but it had to be done. In a fit of chivalry, though, I then waited so we could cross the finish line together. Not sure where that came from.

It was a fun ride on a sunny summer's evening, but it's hard to call it a race and celebrate victory when you're lapping everyone else. Still, it was nice to be Jonny Pugh for a day. 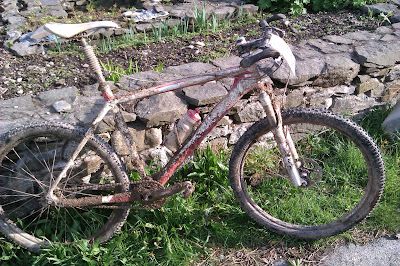 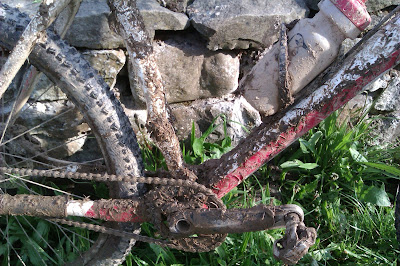