Coed y Brenin Enduro: My highlight of the year

I'm kind of falling out of love with blogging. It's turning into a chore and I'm getting way behind, I don't really know who I'm writing for or why, and I don't feel like I have anything more to say. Regular readers will already have learned that:

1. Mountain bike races are equal parts tiring, scary and fun
2. Racing on a singlespeed is a viable proposition: reliable, light, fast but hard work
3. I love mountain biking
4. Wales is very muddy
5. I'm just not one of those people who look cool on a bike

What else is there?

So the plan is to keep this one fairly short - even though this was Event of the Year for me in terms of both the fun factor and my performance. Which seems a little unfair on both the organisers and my ego, but, hey, something's gotta give. The official event photographer, bless him, has also done his bit, contriving to miss the leading riders at all three points on the course where he managed to snap everyone else in soft-focus hardcore action, so there are precious few pictures to accompany these words.

Having loved the Dyfi Enduro back in May but made such a hash of it (see here), I was looking forward to its northern cousin and had a point to prove. The rain had put a slight damper (geddit?) on what was supposed to be the highlight of the season a fortnight earlier at Margam (see here), but the return of dryish conditions meant that I now had another chance to see just what the new steed and I were capable of.


Posh video of the weekend by Will Sanders which makes it all look so much easier than it really was. If you're really, really patient (the video host won't let me link straight to it), check out the start of the race around 2m30s in: Gareth Payne flying off the blocks like Usain Bolt; me having a natter, folding my arms, oblivious to the bearded gunman (bet he rides a singlespeed), and then "Shit, we're starting!"

The start was marked with a gunshot, and appropriately enough clubmate/friend/inspiration Gareth Payne went off like a bullet, full-on sprinting up the first part of an interminable fireroad climb which gradually grew steeper and rougher until the forest gave way to open moorland three miles later and 600 feet higher. I decided to take it steady but was soon clear in second place and very gradually reeling Gareth in. Come the first whiff of a descent, though, he was out of sight and out of mind - I knew any chance I had of keeping up with him was now gone. 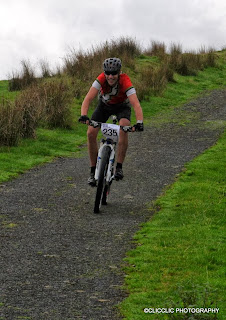 Enjoying second place coming off the moor onto the road. Photos by Clic Clic

By the time we dropped off the moor I was a long way ahead in second, but this was not to last. The first descent was wet and rutted and fast, never my favourite combination early in a race. It also led onto Abel, one of the best but scariest downhill sections on the man-made trails at Coed y Brenin. Whatever you do, don't look down...

If you've never done any mountain biking and wonder what it's like, do watch this video. It's the best I've seen at conveying how it feels to hurtle down a good descent. I've even managed to get it to start automatically at the interesting bit. Includes a coolly executed tactical dismount by rider/cameraman Ryan Jones.

It starts OK but then gets rockier and steeper with big steps/jumps and a nasty drop to one side, so the penalty for failure can be quite severe. I thought I was doing OK until I heard two riders behind gaining on me fast. I eased off the brakes and managed to reach the bottom without quite being caught and having to move aside, but I was gutted to have all that hard work on the way up wiped out on the way down. This would be an all-too-familiar pattern over the course of the race as I jockeyed for position with Matt Mountford and Jon Roberts, the three of us battling it out for second place. While their superior descending was disheartening at first, it soon became a source of inspiration: if they could ride those descents that fast on a cross-country hardtail, then so could I. In theory.

The course went on to take in most, if not all, of the singletrack sections on the classic MBR and Dragon's Back trails. The man-made stuff at Coed y Brenin is fantastic - sometimes fast and flowing, sometimes slow and tricky, but unrelentingly technical with plenty of rocks and roots to keep you on your toes:

Mixed into this were some interesting "natural" trails - read unsurfaced and unpredictable. My winter training on local bridleways really came into its own here, as I hunted down grip and traction through the inevitable muddy and boggy bits. I completely missed the turning onto one climb - a big thanks to a sporting Matt Mountford for calling down to me from up the hill. It was the last I saw of him, though. Another section was marked with a full three downward arrows, MTB-speak for "make sure you're not behind on your life insurance". It started off very, very steep but smooth, which was OK, but then it got even steeper and a whole lot rougher as it plummeted down to a rocky stream crossing, which was not OK. It was actually a job getting down there on foot without cartwheeling to my doom. No way was I going to attempt riding that without an extensive survey, a lengthy pep talk and a few false starts, and I had no time for any of that nonsense with Jon Roberts hot on my heels.

Another natural descent that sticks in the mind was a straightish and smoothish but narrow and off-camber traverse of a very steep wooded hillside, further enlivened by an über-slippery damp-larch-needles-and-roots combo. My memory might be playing tricks on me, but I remember it being something like this:

The feed station at 40km was where I finally lost Jon and gave up on a top three finish. The place was teeming with just-for-fun riders on the short course packing in the flapjacks, which made getting to the water possibly the hardest part of the whole race. The ensuing climb was a mind-numbing, soul-destroying slog on tired legs, but gave way to an exhilarating descent back down to the visitor centre, which just went on and on and on before turning into the world's worst crazy paving for a rocky, steppy, scary finale. Absolutely brilliant.

They thought it was all over, but it wasn't - there was still another 10km to go on the other side of the A470 on bits of the Tarw and Red Bull trails. I was well and truly knackered by now and just hanging on. 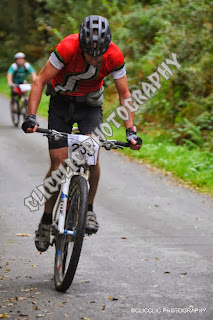 No smiles for the camera now. Winding my way through the 30km riders with 10 km to go.

I know this side of the forest well from a few XC races and the much-missed Mawddach Goldrush event, which has now morphed into a running race. Madness. Strangely - and luckily - the big fireroad climb up to the top was way shorter and flatter than I remembered it. I must be fitter than a year ago! And half-way up I spotted a familiar figure weaving his way past the slower riders - Jon Roberts. To claim I got a second wind would be an exaggeration. I just kept grinding up the hill at what felt like a snail's pace, and eventually caught and passed him.

So far, so good. But I had a good idea of what was coming next - basically making our way back down the hill - and Jon descends much faster than me. So I absolutely hammered through the next bit of flattish singletrack, held up only slightly by some very well-behaved back markers who kindly stopped to let me past unbidden, one of them taking a tumble in the process.

I was riding like a man possessed. A long flattish chunk of fireroad (thank goodness I had gears for once) led onto a section called Rocky Horror, which isn't actually very rocky, more a super-fast windy ribbon of singletrack, but I had history here. At the Mawddach Goldrush 18 months earlier I pinch-punctured front and rear tyres together half-way down this section - on both of the laps I completed before finally giving up. (I also picked up three punctures elsewhere, making a total of 11 holes to repair that day, fact fans). Somehow putting this out of my mind, I flew down there as fast as I dared. Well actually a bit faster than that. Surely Jon couldn't go any quicker than that. Or could he?

Next up was Pins and Needles - more dodgy crazy paving, but familiar crazy paving. I must've done this section and then the old Red Bull pump track down to the finish by the old visitor centre a dozen times in XC races. I was beginning to feel confident now. Past the point where I smashed my brakes earlier this year; past the place where I lost my saddle last year. But boy was I tired now.

Near the end, very near the end, the trail turns up a slight climb. Maybe 50 yards long. Nightmare. I thought I was going to collapse. But I willed myself on and somehow managed to keep going. Then it was downhill again, the final section along the river. Nearly lost it on a rooty corner, got a round of applause from slower riders for staying aboard. Kept on going, hit the finish line, done it - third! Yay!!! Jon too must have been knackered, as I finished a good minute clear of him in the end. I was also only a couple of minutes behind Matt Mountford, but I really couldn't have given any more.

This was my best result ever. The trails were brilliant. The bike was brilliant (I wouldn't have made third on the singlespeed). And I was pretty darn good too, even if I say so myself. I will definitely do this one again. It isn't as "out there" as the Dyfi in terms of nuttiness or remoteness, but it's a cracking mix of everything. But boy was it tough.

Completely failed to keep this one short, didn't I?