The omens weren't the best:
So I really should have spent the day tucked up in bed mainlining Lemsip, but with the series title at stake, that wasn't ever going to happen. 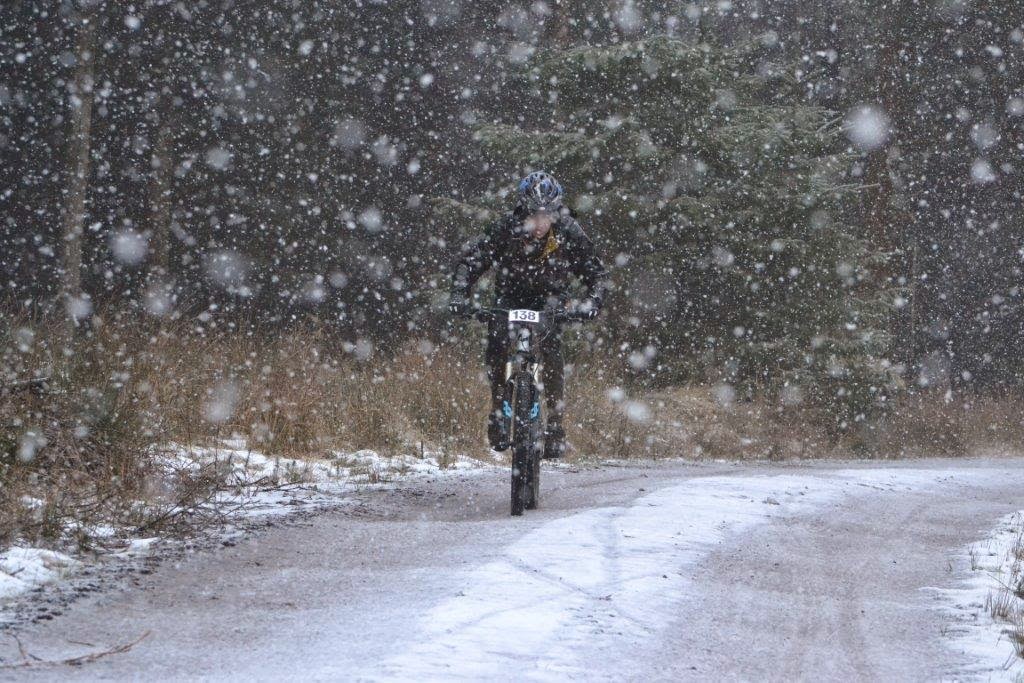 Cracking photo (of another rider) courtesy of The Valley Photographer on her final mission. Another 314 photos of the event here.

The weather was, if anything, even more foul than promised, treating us to a crash course in meteorology on every lap, as rain at the bottom gradually morphed into sleet and eventually into snow as we gained height, all topped off with an Arctic headwind on the most exposed section. This gradually took its toll on both riders and trail. No winter wonderland and polar bears this time around: I'm convinced I rode over a hippo or two on the woodsy sections as mossy loam was churned into wallowy slop, and even the surfaced tracks metamorphosed into little brown streams that filled up all the puddles and ensured a proper soaking from both above and below, waterproof kit be damned.

Despite this, the first half of the race was fun: I didn't feel too bad, I was in the thick of things, I was still warm and dry. But the second half of the race was horrid: I got weaker and weaker, I lost touch with the leaders, I was soaked from head to toe*, and my hands grew desperately cold. By the end of lap 4 I was struggling to change gear (not the end of the world in itself given my singlespeed leanings, but this is often swiftly followed by struggling to brake, which is never good news), so I stopped by the car for a change of gloves - only to have a comic struggle to get the dry ones on as the lining clung Velcro-like to my damp fingers. It took what felt like a couple of hours of whole-body wriggling and jiggling to get them half on and be able to ride off, followed by an entire climb of non-stop wiggling of fingers and thumbs to get them on the rest of the way - all of which served to thaw the whole of me out quite effectively and see me through the final tortuous lap.

*In the name of science, I weighed my kit when I got home. Shoes, clothing and helmet came to 14lb! Once clean and dry, they were back down to 7lb, a difference of half a stone or three litres of water. Now that's what I call soaked. Maybe it's time to invest in some less absorbent winter kit... 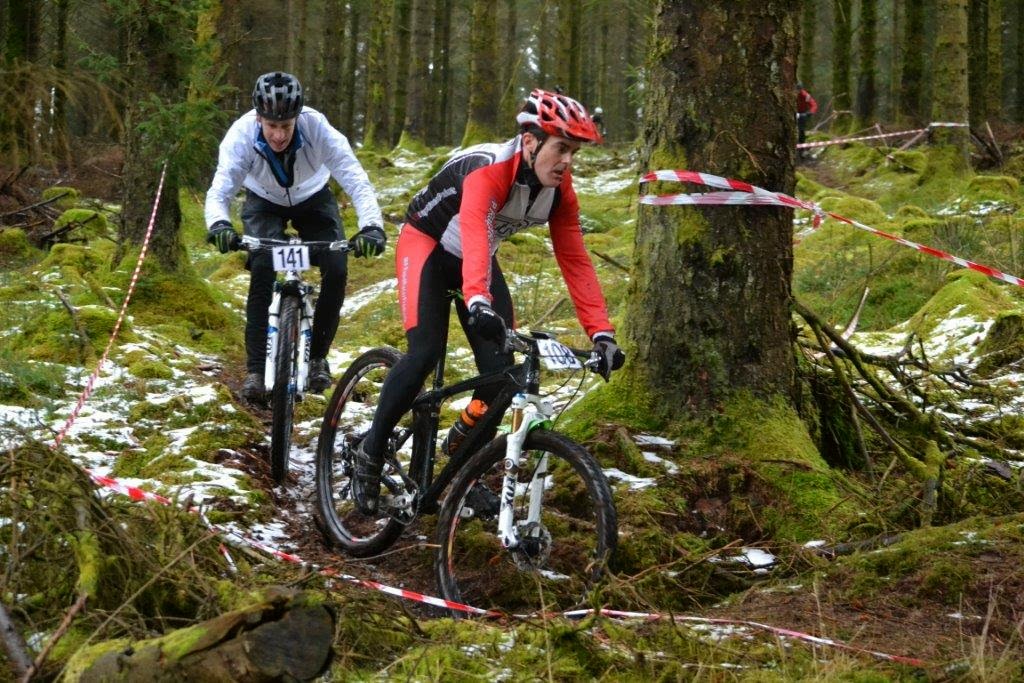 Shadowing Huw Thomas on the first lap. Photo courtesy of The Valley Photographer.

I'd started pretty well. After a warm-up that consisted chiefly of hanging around the wood-burner in the café, I chased former European 24-hour champion Huw Thomas up the first climb and into the first singletrack sections, with Jon Roberts not far behind. For a while it was the three of us together and I felt good. But come the second lap I started to drop back. Nick "Steady Eddy" Reese then passed me on his way to catch Jon Roberts at the death and claim the win; and on the third lap the Karate Kid appeared out of nowhere to give me the chop this time and finish an impressive third ahead of Huw Thomas.

Although it was frustrating not being able to put up a better fight, I was really pleased just to finish, especially as quite a few healthy lads didn't. Having all but drowned in the night in a sea of mucus, I thought I'd be firing snot-rockets left, right and centre before collapsing mummified half-way through, but my nose miraculously dried up for the duration of the race - I guess my body knows its priorities! Similarly, my ribs held up fine, despite a last-lap mishap that saw me skid into a tree trunk and somersault over the bars to land on my head some 20 feet down the trail. Ouch. All that hard work over the past three weeks developing revolutionary new sneeze-suppression techniques to protect my ribs was so nearly undone in an instant, but in the end I was fine. My heart was no longer in it, though, and I pootled back to the finish in the manner of my dear departed Grandad, whose main claim to fame, apart from consistently voting National Front, was cycling between gas meter readings at less than walking pace. And he then had the nerve to blame immigration for the country going down the pan... 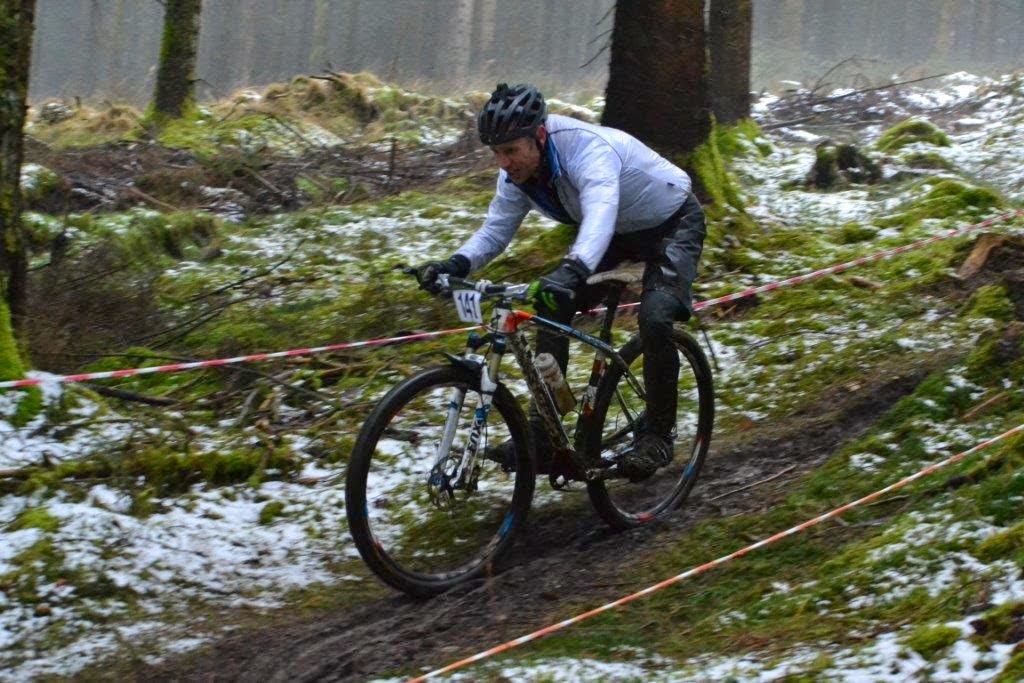 Second lap - beginning to get squelchy. Photo courtesy of The Valley Photographer.

My ribs were also the main reason I didn't take the singlespeed (again). But I was also keen to test my new 1x10 conversion*, which I'd done all by myself. This was quite a gamble, as I am notoriously mechanically inept. As a kid I spent months making a bird-table at school, only to find one day that someone had mistaken it for scrap and chucked it out. [Cue violins.] But I'm pleased and proud to report that the conversion worked perfectly. Put a clutz in charge of maintenance, and I finally get a race without any mechanicals whatsoever!

*Translation for non-biking readers: I threw away my front gears. And spent an outrageous amount of money doing so. Why? Well, it leaves one less thing to go wrong and saves a tiny amount of weight. Also, 1x10 is very much en vogue, and as you can see below I'm a dedicated follower of fashion. Trust me, you can't get much more "now" than an elliptical narrow-wide chain ring and clutch mech. 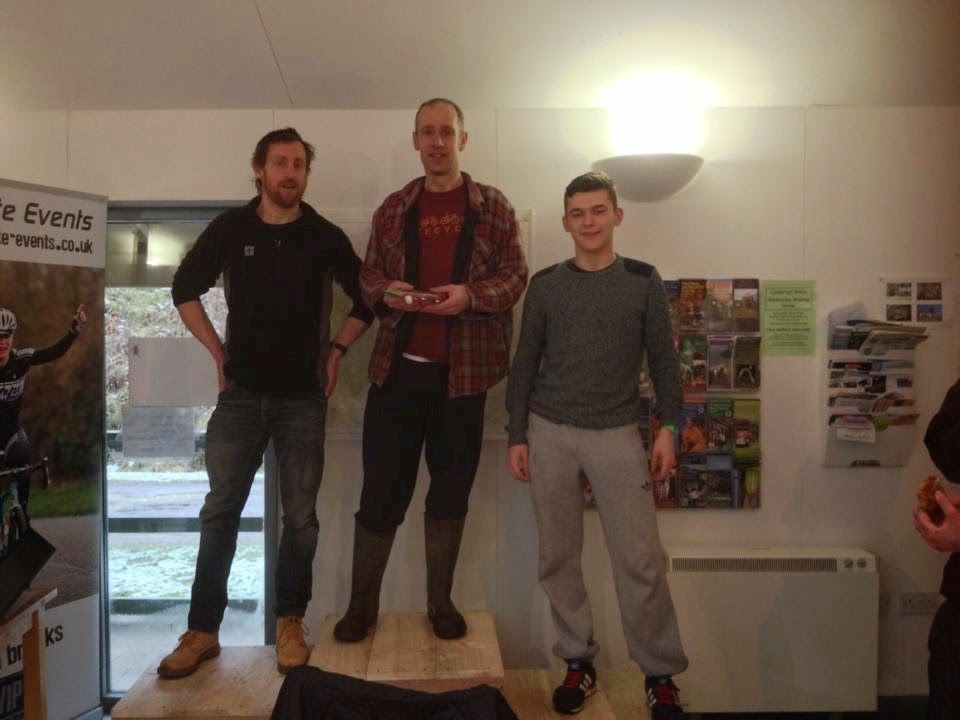 Farmer Giles enjoys his moment of glory next to close runner-up and wannabe catalogue model Jon Roberts. Not sure why the Teen Dream is on the big boys' podium, though.
Cameraphone image courtesy of The Disappearing Photographer. Best of luck with your plans, Carol.

Limping home in fifth was enough to claim the series win and add to my burgeoning collection of bike-cleaning products from Muc-Off (no excuses for a dirty bike now!). Admittedly it was a slightly weather-assisted win, as Jon Roberts missed one round after being snowed in, but I did beat him the one time I had no mechanicals or deadly agues, and I kinda feel I deserved it just for completing this last round. God, it was tough. Racing at Trallwm is always tough - big climbs and physically demanding descents - but the weather on this occasion made it an absolute killer.

A massive thanks to Neil the organiser and his merry band of marshals and helpers (Chris, Shaun, Kyle, Amber, Michelle and the others whose names I don't know) for running the races, Coed Trallwm Mountain Bike Centre for hosting them and Carol The Valley Photographer for capturing them on film. It had everything you could possibly hope for from a winter series - great courses, good company and some really s**t weather. I was going to end by saying "Roll on next November!" but then I remembered this is Wales, so I won't have to wait that long...

Next up for me: Mondraker Enduro Round 1 at Coed Trallwm on 21-22 March and the Little Devil 60km at Nant yr Arian, Aberystwyth, on 29 March.


Results:
Now where did I put them? To follow...