Welsh XC Series Round 2: One gear, one brake, one bell-end

Had a bit of a stinker on this one. Struggled with a technical course and topped things off with the rather misguided decision to throw caution to the wind on the final lap in the pursuit of glory (well, eighth place), which resulted almost instantly in a comedy off leaving me with full-body bruising, cracked Garmin, one usable brake and a snapped bell, no, bar end. Luckily my trusty £9 Lidl lid kept me alive to tell the tale... 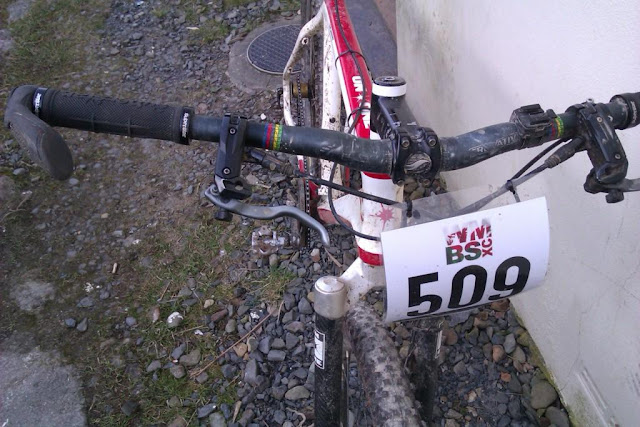 Well, Scott Bugden at Welsh Cycling clearly has a sense of humour, coming up with a course in Snowdonia with so little climbing - not much more than 100 metres per lap. On the other hand, much of the course was über-technical - not scarily so, just relentlessly tricky - which made it the most challenging and fun XC course I've tackled. OK, it was the same course as at the Welsh Championships last year, but this time it was dry and so almost all of it was rideable even for a klutz like me.

The first lap was really difficult. Trying to pick your way up rooty, rocky climbs and down rooty, rocky descents is hard enough without the frustration as riders in front of you constantly mess up and interrupt your flow - and then the embarrassment as you do exactly the same to those behind you.

This was particularly acute on a singlespeed, where momentum is all the more important on technical sections. It wasn't until the second or third lap when the riders were more spaced out (now there's an idea, riding in kaftans might level the playing field somewhat!) that I could properly see what was ahead and stand a realistic chance of making a decent fist of it.

Having been called up to the front row of the grid after my result in round 1 (which I have to admit still makes me feel ten feet tall), I suppose I could've sprinted off faster at the start and avoided the traffic, but then I would've had to cope with the pressure of much more able riders breathing down my neck and trying to muscle through as I pussyfooted my way round.

The 3.5km course consisted of two very different loops off the start/finish area. Loop 1 started with a short climb leading to a twisty, rooty, fiddly, low-speed descent. This had a couple of officially difficult triple-arrow drops down steep banks which I managed no problem with the seat dropped down - no B-lines for me, thank you very much! What I did find difficult, though, were a couple of  places in the midst of the rocky rootiness where you had to turn sharp right round a tree and then briefly head uphill again. This required a combination of balance and strength that was not always available to me, especially when leading with my weaker left foot.

Loop 2 started with a decent climb on loose gravel which allowed me to power past plenty of granny-ringers, and finished with a fun fast swoopy bermy pumpy descent with a couple of jumps that even had me airborne. Sandwiched in-between was a real challenge - half of the Pins and Needles section of the Tarw trail backwards.

Pins and Needles is a long section of uneven smooth rocky slabs, normally ridden downhill. I've also ridden shorter versions at Cannock on the FTD trail and at Brechfa on the Raven, and I just don't get the point. Sure, it requires a bit of concentration, especially in the wet, but it's just relentlessly jarring and unpleasant. Bump-bump, bump-bump, bump-bump. Like you're Winnie the Pooh being dragged down the stairs by Christopher Robin.

In reverse, though, it turns into a tricky technical ascent and is a rewarding challenge, hauling yourself up step by step, lifting the front and then unweighting the back of the bike. Last year it was slippery too, but after this year's Freaky February it was bone dry and I was able to ride most of it with increasing confidence. That said, some bugger's made a Strava segment of this section, and I'm ranked pretty much last...


And it was flushed with overconfidence from pretty much nailing this section (or so I thought) on the last lap that I caught sight of the eighth and ninth placed riders not too far in front of me and stupidly, very stupidly, decided to go for it, only to topple over and land rather badly on some rocks just as I turned off Pins and Needles. Although it felt like I lay there beetle-like under my bike for an age, Strava tells me I was moving again within a minute. However, the crash took out my front brake lever, forcing me to limp round to the finish very cautiously (albeit - the Strava never lies - no more slowly than before).

I hung around after the end for the presentations in case they cocked up the results again, and indeed they did, but sadly not in my favour so I wasn't mistakenly awarded a gold medal as happened last September. 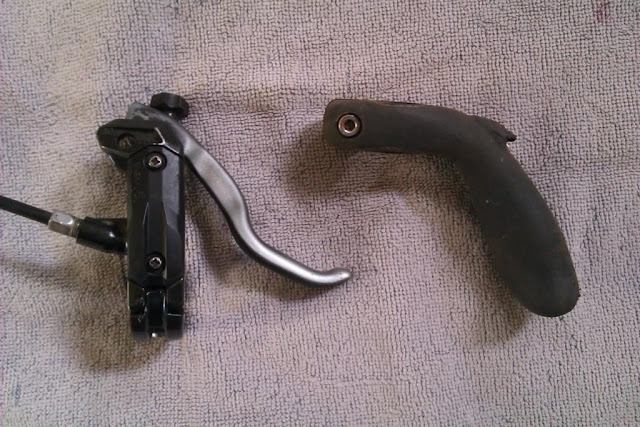 Both brake lever and bar end were to finish the race with brewer's droop.

The singlespeed definitely made the tricky bits trickier on this occasion, and the flat course really didn't exploit its climbing credentials. Add in three hours in the car there and back having my ear bent about the benefits of 1x9 gearing by the third-placed rider, I'm beginning to think that singlespeeding really is madness and I should go back to gears. I'm not singlespeeding because I'm a purist or hard-nut or because I have a beard and drink real ale and only ride "natural trails". The frame I wanted just happened to come set up as a rigid singlespeed, and it seemed wrong not to give it a go... And I loved it... And I still do... But if I could find/afford a cheap geared bike of similar feather-like weight, well of course it would be better. Except in mud, obviously. Which rules out most races round this way. But in dry conditions like this when derailleurs actually work, it would be perfect. Except I'd have snapped the derailleur off when I went over. So gears really are useless after all... Only they're not...

Next stop, bruised ribs allowing, is the final round of the Red Kite XC series at Coed Trallwm on 17 March. Could this be the last hurrah for me racing a singlespeed, or will I MTFU and persevere? Oh, the suspense. 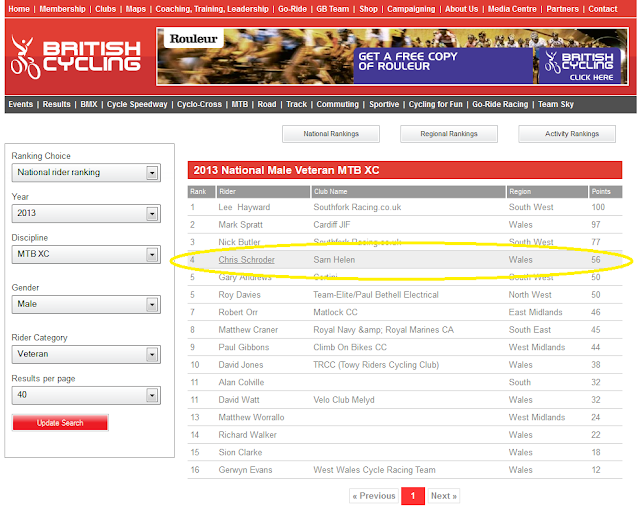