"So where are you racing today, darling husband?"
"Builth Wells, my dear woman."
"Fabulous wild countryside down that way."
"Well yes, but actually we'll be lapping the carpark at the Royal Welsh Showground."
"Oh." 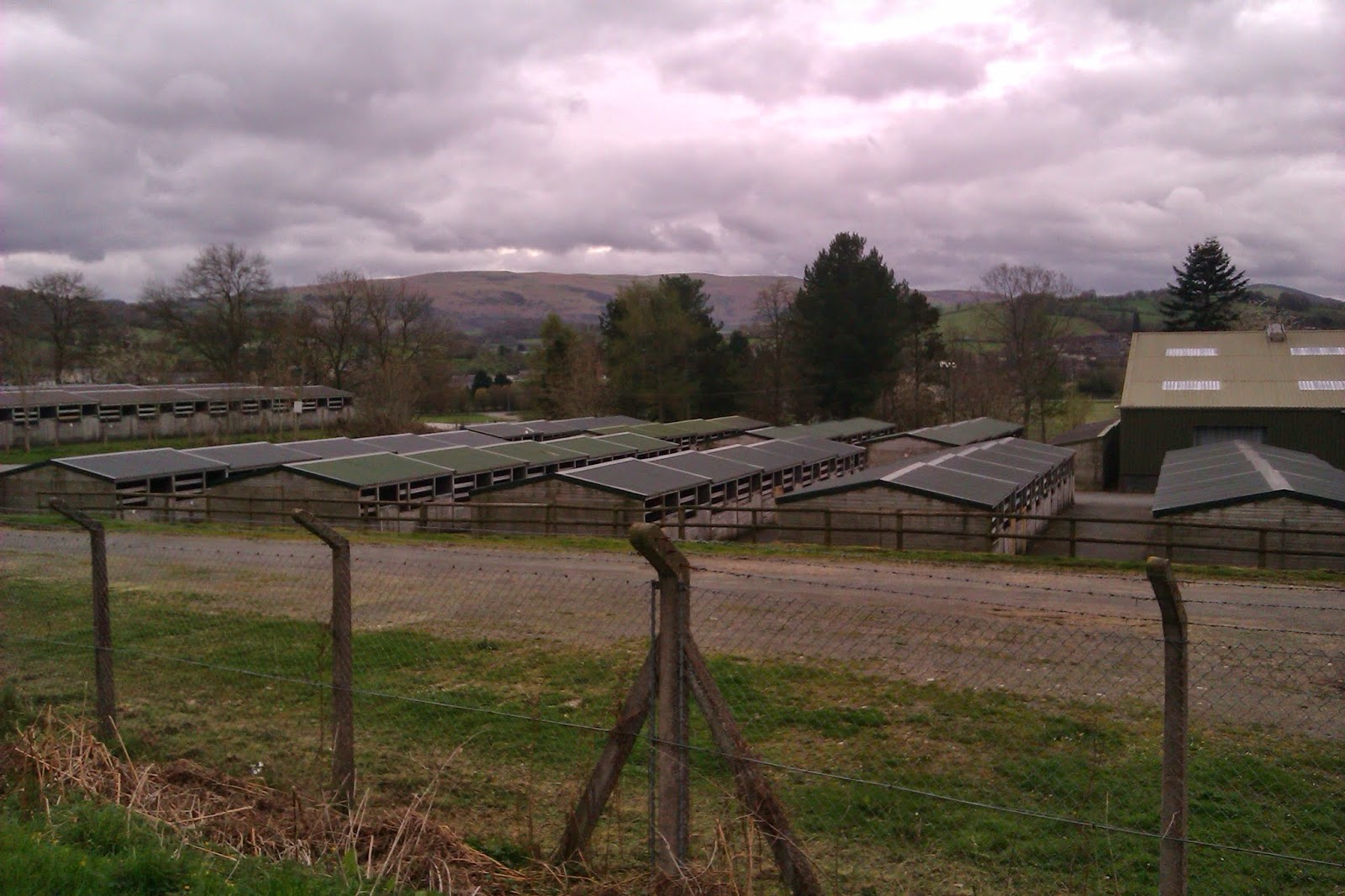 The view from the arena of row after row of animal pens was rather how I imagine Auschwitz to have looked. (Little bit of politics there. Perhaps I should get sponsorship from the ALF. Then again, I suspect my return to vegetarianism is behind this year's lacklustre results. So watch out, sheepies.)

Didn't sound too promising, did it? In fairness, though, it's not any old carpark, being built on different levels staggered up a hill. It's hosted many a cyclocross race in the past, and the course today was very like cyclocross with the odd bit of added gnarl. Lots of short sharp drops and short sharp climbs, a few sections of rooty singletrack much like Round 1, some narrow off-camber stuff, lots of grass and a fair bit of carpark.

Still not really selling it, am I? All I can say is that it was actually really good fun. Nothing very scary but a fair amount of concentration required. The whole MTB festival thing with events all weekend also meant lots of spectators, and the marshals were mainly of the enthusiastic rather than the sullen community service variety, so the compact course meant a pretty steady stream of encouragement, which always helps. Note, however, that the 29 Gears Seal of Approval is weather-dependent - in last weekend's monsoon conditions it would've been another running course and I would've hated it.

There were two slightly tricky bits. One was a small rock garden on the return to the arena which almost - almost - had me over the bars on lap 3 when a photographer flashed me at a bad time. 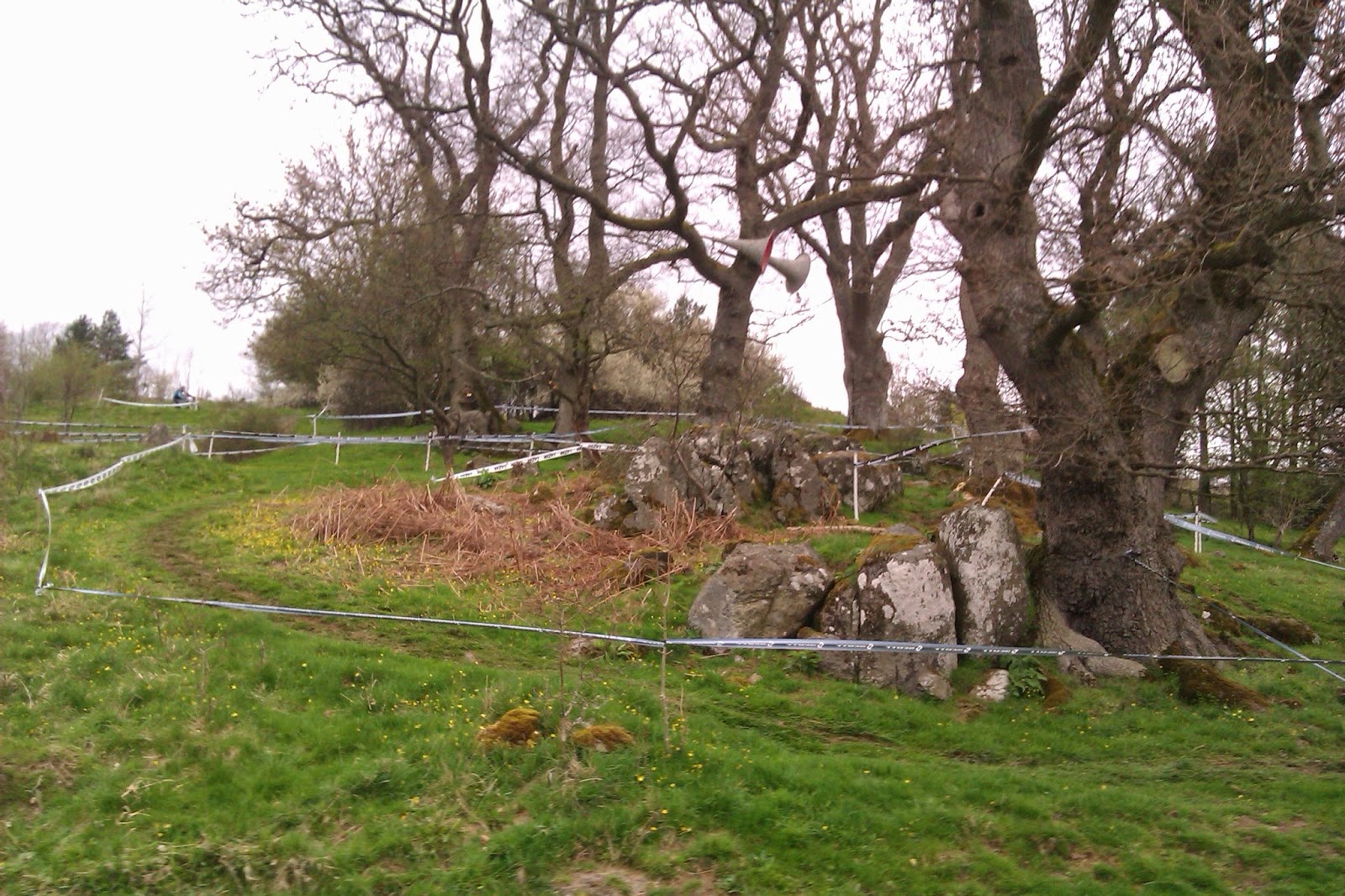 Oops, managed to snap the U-rated chicken line by mistake. The PG-rated line through the rock garden was on the right. I guess the X-rated line would've been straight over the top, naked.

The other was a long steep drop down a rough grassy bank of the kind that would've freaked me out last year. OK, I admit it, it still freaked me out, but not until halfway down, which is progress. Thing is, drops are all about what happens when you get to the bottom. We all like a nicely rounded bottom, but more common is a mucky wheel-grabbing hole.


I will now hand over to my glamorous assistant Catrin, who will first ably demonstrate how NOT to roll a drop with a tricky run-out:


Ideally you'd lift the front wheel just before hitting the bottom, what is known in biking circles as a "manual" and to the rest of the world as a "wheelie". Easier said than done, though. Teenage boys spend a lot of time manualling, but sadly when you get to my age it's much harder to get it up.

Fortunately the run-out in Builth wasn't too bad, but it was a far bigger drop than Catrin's so it was hard not to pick up speed and hit the bottom hard. The last time I landed so hard I really should've snapped the forks or the bars or something. Kudos to the bike - tough as old nails (excluding sabotage, see below). Yes, I was back on the singlespeed. And I really enjoyed riding it again! The simplicity is so refreshing: get on, pedal like crazy, finish. I did miss gears on the odd flat section, but grinding up the hills felt soooo good. (Yes, I know. Actually, I think "special" is the word you're looking for.)

Wary of the seal not holding, I went pretty gingerly over the rocky sections for the whole race, costing me more time. I also got held up behind various backmarkers on the singletrack sections, and it was a seriously competitive field in the first place. Lots of excuses there! Anyway, I eventually picked my way past an assortment of masters (bastards in their 30s with hair), vets (fellow 40-something mid-life criseans) and grand vets (think Werther's Originals) to finish 12th vet (or 7th master). The big question, though, is: Was it an accident or was it foul play? Did someone feel so threatened by my lo-tech machismo that they decided to take drastic action? We shall never know...

So, yeah, ideally there could have been some more technical sections and a proper hill, but I really enjoyed myself despite the nightmare start and another disappointing result. Next round is at Fforest Fields, not my favourite course but finally some proper mountain biking and definitely one for the climbers. It's also the Welsh champs, so I really hope the stars finally align. If I get another flat I might just give up XC!!!

Before that, though, are Margam Madness (my favourite race with added World Cup sections this year), the Red Kite Gravity Enduro (bound to be great descents) and the Dyfi Enduro (scores to settle). Phew. It's like busses out there.