Greatest strength: Kept on going
Greatest weakness: Legs
Result: 4th (or last, depending on how you look at it)

I have something to declare. Yes, I've sold out and become a corporate whore. Sadly I haven't (yet) been signed up as the new face of Calvin Klein or taken delivery of a lifetime's supply of Carlsberg and a free Lamborghini for the school run, but I have been given some free stuff in return for writing about it here in my world-famous blog.

I'm aware there is an ethical issue here. However, free stuff is free stuff, and free stuff is cool, so sod the journalistic/artistic integrity, gratuitous product placement here we come. Or maybe not. Oh, make up your own minds.

Anyway, one freebie was a selection of gloves and socks from SealSkinz, purveyors of the finest waterproof cycling accessories. Sounds perfect, given the winter we've just had. Only the parcel arrived during an unusually balmy spell in March. "Shame they didn't come earlier in the year before spring arrived," I said.

Fate was listening. Fate was tempted. Fate also clearly has something in for Red Kite Events. Just what did Neil Delafield do in a former life to make the weather gods so angry? Every MTB event he's run this year has been a wash-out.

Yes, two days before the Red Kite Events Little Devil (free entry if you blog, Chris, no strings, just tell it how it is), spring buggered off back to the Mediterranean (how did we ever cope without spellcheckers?) and Wales became, well, more Welsh. It chucked it down until every single bloody dried-out puddle had been refilled and most of the trails had turned into streams, and then it rained or drizzled throughout the event itself.

Perfect opportunity, then, to try out some quality SealSkinz products!

Sometimes a picture is worth a thousand words.
Photo: Carol Corbett at CAC Photography.

Neil Delafield is lucky they came up with Care in the Community, because there was a very respectable turnout of utter nutters despite the monsoon conditions - including three riders I had down as being at a similar level to me. The four of us pulled clear right from the start, and it was shaping up to be a great battle.

Before heading south to the Crychan Forest on a variation on the Frozen Devil course ridden in not dissimilar conditions back in January (see here), we were sent on a detour north into the Irfon Forest up the Climb from Hell. Eventual 1-2-3 Jon Roberts, Gareth Jones and Carwyn Davies, along with little old me, went piling up it at speed: I guess we all fancy ourselves as strong climbers. However, I felt awful. As tarmac gave way to farm track and then bedrock and ever looser stone, getting steeper all the time, I struggled to hang on to the others, and as we headed down again I lost them completely.

To be dropped so early - and on a climb - hurt. A lot. We're talking three very strong riders, but I'd beaten all of them at some point in the previous six months, so I thought we'd be more evenly matched. Was I just kidding myself? I was still recovering from losing my duathlon virginity the previous weekend, but even so. Or perhaps they were just flying - after all, the four of us beat the event photographer to the descent down the other side...

And what a fantastic descent it was. Slippery bedrock, loose corners, a totally committing steep drop - and that's just in the dry. In the wet it was a real handful, and I was delighted to make it down in one piece. Fabulous, darlings. And the good news for thrill-seekers is that it'll be back, with luck in drier conditions, as part of the sure-to-be-splendid and certainly competitively priced Red Kite Events gravity enduro on 26/27 April.

It was then a long slog over to the Crychan via a fair chunk of road, a lot of water and two big offroad climbs. It was worth it, though, for the next descent alone, a rooty cracker with a tricky drop onto the road at the end (not unlike the one Catrin demonstrated in my previous blog). I made a right hash of this descent, my balance was all wrong, my line choice terrible, my eyes struggling to see - yet Strava tells me I did it quicker than ever before. Strava also tells me I climbed up to the Crychan in exactly the same time as in the Frozen Devil, and that I got a PB on the next big descent. So while I felt like I had all the coordination and strength of a newborn foal, the data suggest I was pretty much on normal form. Looks like it was all in the mind, and my mind can be a pretty scary place.

Said next descent is one of my favourites, part steep rocky enduro trail and part rooty woodland singletrack. Again, though, I was all over the place, and right at the bottom I contrived to topple over for no apparent reason, a hitherto uncharted soft part of my knee landing right on something pointy. It hurt a lot. It still hurts two weeks on. Suffice to say this did not help my positivity.

Doggy style after too much energy drink?
Photo: Carol Corbett at CAC Photography.

At that point I kind of went into a trance. I was wet, alone and feeling sorry for myself, and my heart really wasn't in it. But for some reason I carried on. For the two hours between the two feed stations (nice welshcakes btw), I didn't see a single soul. Perhaps loneliness is the lot of the racer, even when there are others around you. While there is a clear sense of community among racers, we're also competing, and like Top Gear we'll always leave a man behind. Sometimes I wish I were more normal, riding with a group, taking it easy up the climbs, stopping for a snack and a chat before piling down the next descent, then regrouping for more of the same. In truly horrid conditions, it really is much the better way. And - apart from the weather - that is exactly what I hope to find at the sure-to-be-splendid and certainly competitively priced Red Kite Events gravity enduro on 26/27 April.

The rest of the course is a bit of a blur to be honest, some familiar sections, some unfamiliar sections, up then down, up then down. Nothing of note occurred until the very end when my front wheel suddenly plunged into a boggy hole and sent me over the bars face down into some suspicious-tasting mud. Oddly, this lifted my mood somewhat. 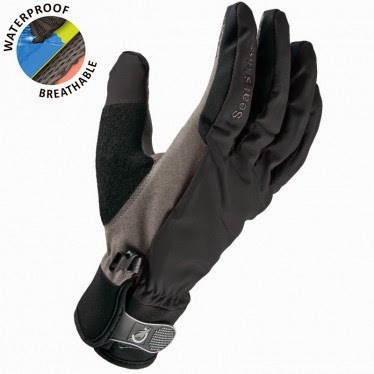 So how did the SealSkinz quality products perform? Did my hands and feet stay nice and dry? (The rest of me certainly didn't - nor did my bike's internals, with the bearings in both hubs and bottom bracket ending up full of muddy water). At this point, I'll just say that the gloves were amazing but the socks were overwhelmed by the conditions. I plan to do some more testing and will report back in due course. Betcha can't wait.

And what about the course? Well, it was always going to be tough, and the conditions made it brutal. There were three nasty climbs and two big descents in the first 10 miles, which was pretty intense. The course yoyoed more kindly after that, and thankfully the final 10 miles were again relatively easy, with a lot of fireroad. Everything was rideable despite the rain, and the descents were a real test of concentration and nerve but still a blast. I love the Crychan. Red Kite Events head honcho Neil Delafield wants to be known for tough events - and on this evidence I'd say he was getting it right.

It wasn't the course or even the weather that stopped me from enjoying myself. It was more a lack of mental strength that was my downfall.

The next Red Kite Events event is the sure-to-be-splendid and certainly competitively priced Red Kite Events gravity enduro on 26/27 April. A gravity enduro is essentially a pootle round the forest with a handful of timed fast-as-you-dare descents. This format definitely doesn't play to my strengths, but it'll be fun to try - it could be just the tonic I need.