Tregaron Duathlon: And now for something completely different

I entered this event because I've always wanted to do a duathlon, it was very local, and, if I'm honest, I fancied my chances of adding to my medal collection. A duathlon ought to be right up my street, combining two things I love (no, not sex and drugs), and the 3-15-2 format sounded like a walk in the park for an endurance junkie like me. Three mile run? Did that at my last "bike race". Fifteen mile ride? Eat 'em for breakfast. Two mile run? Been further for a bus. The only snag was that it meant running and cycling on tarmac, whereas I'm more of a muddy woods kinda guy. Running on roads does my body in; riding on roads does my head in.

Still, I enjoyed the first run. Essentially we legged it up a very big hill with a nice view and then plummeted back down again. The pace was rather full-on but I was on fresh legs and it was over in a flash. So far, so good. 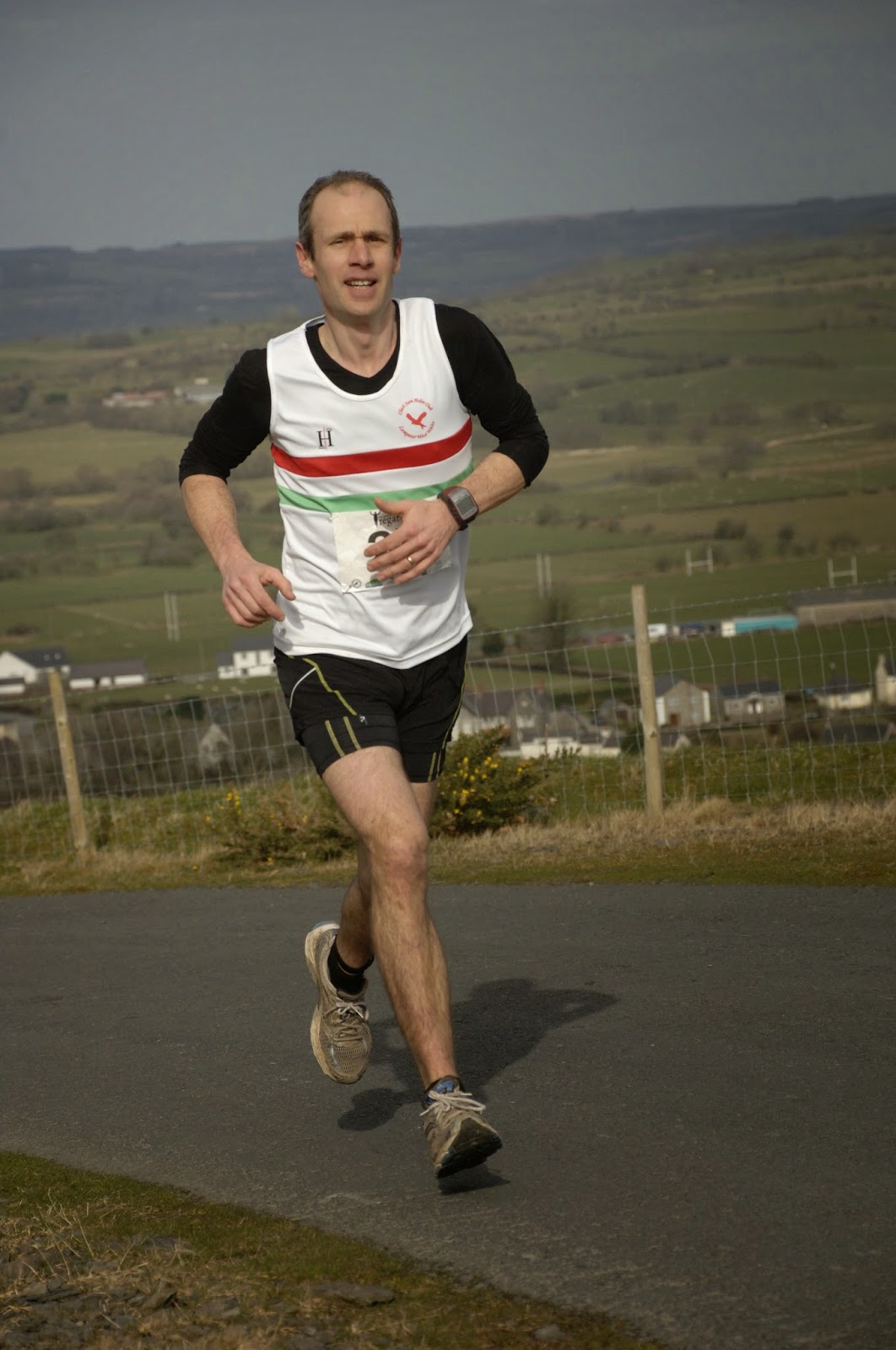 The ride, however, went on forever. A flattish circumnavigation of Cors Caron (the biggest raised bog in Europe, fact fans), it was the longest 15 miles I've ever ridden.

I don't normally do road riding. I don't even own a road bike. I would've taken the singlespeed with the knobbliest tyres I could find just to be contrary and cool, but let's face it, I wanted a result. Luckily Si from Aberaeron's premier hire bike purveyor Pureride stepped up and lent me his cyclocross bike, which was close enough. Not having ridden a bike with drop handlebars since, ahem, 1993, I found it desperately uncomfortable. In terms of speed, though, it was a revelation. With its relatively skinny road tyres, that baby just danced up the hills - and then flew back down them, scaring me silly in the process.

Even so, faced with some of the tri-bar padded-leotard pointy-helmet time-trial bling some of the others arrived with, I was seriously underbiked. Several riders caught me around half way, being considerably and effortlessly faster on the flat. It must have been aerodynamics rather than strength, because when the route turned hillier I was quite a bit quicker than them. This resulted in one bizarre section where I kept having this strange purple alien thing straight out of Star Trek edge past me on the flat only to drop back so fast whenever we hit a hill that I had to look back and check he hadn't been beamed up by Scotty.

Anyway, the ride was truly horrible. It was a lovely sunny day, the roads were empty, the views magnificent. But with no gnarly downhill sections, not only do you not get any high-adrenaline thrills but you never get a breather - you're pedalling the whole time. It's like running on a treadmill - one long unremitting relentless masochistic mind-numbingly boring endless bloody slog. 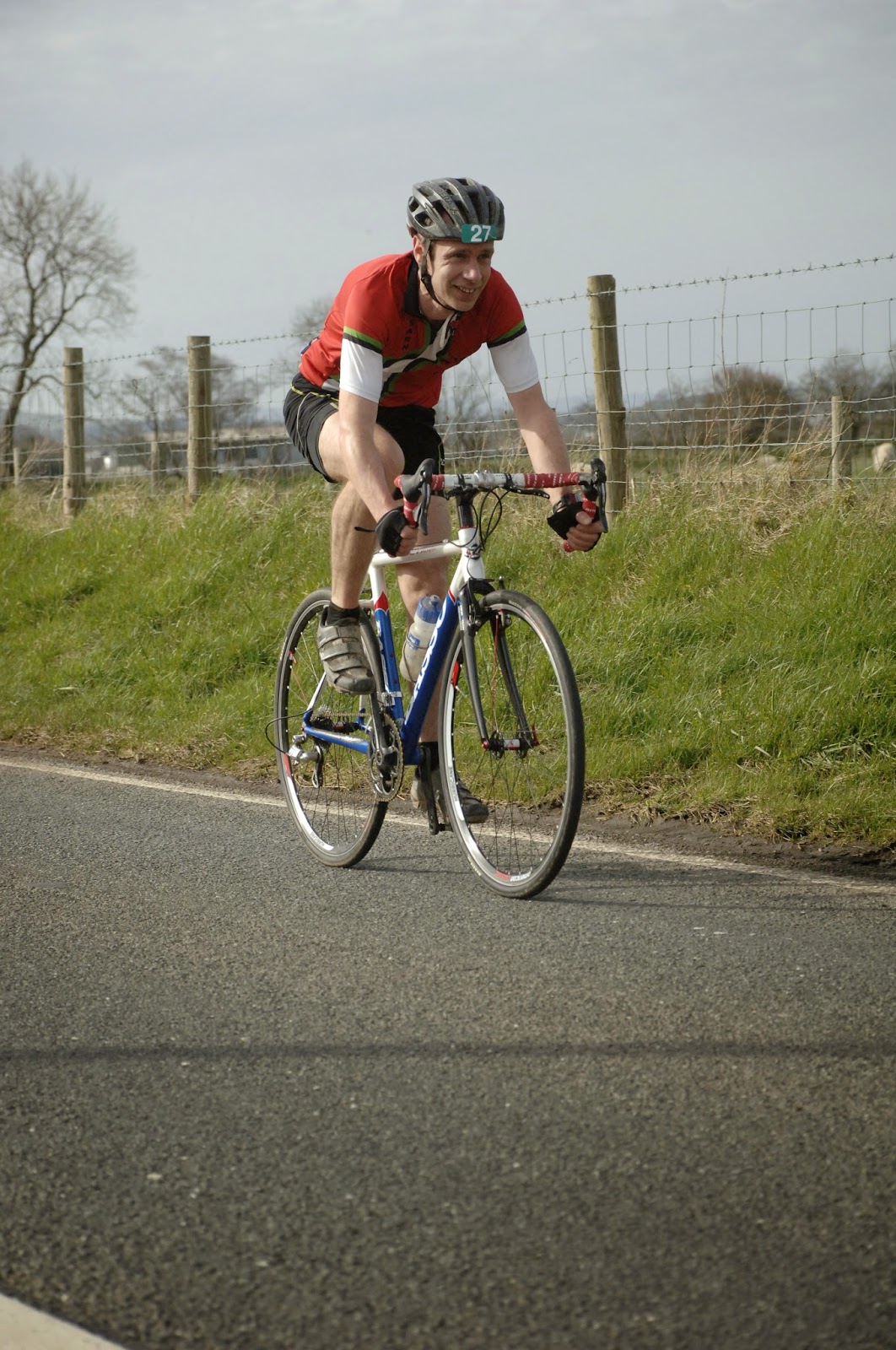 And I was absolutely crap at the transitions. It's not rocket science: all you really have to do is change your shoes. Now I've been proudly tying my own shoelaces for 40 years now, so you'd think I'd be up to the challenge. However, the results reveal that I was 7th fastest on the first run, 8th fastest on both the ride and the second run - and 48th and 42nd fastest on the two transitions...

I finished the first run at the same time as triathlon specialist Heddwyn Evans. After getting my knickers in a knot during the first transition, it took me 13 miles to catch up with him on the bike. By then getting my knickers in almost as much of a knot during the second transition, I gave Heddwyn a 30-second head start on the final run, which was not good, because my legs were now two unresponsive blocks of cramp-infested jelly and I was stuck in first gear. Luckily I wasn't the only one; after about a mile I managed to lumber past a couple of guys who'd whizzed past me earlier on their fancy bikes, and I finally caught Heddwyn on the final run-in. Sadly, what should then have been an epic battle as we sprinted neck-and-neck to the finish fizzled out into a complete non-event as neither of us had the energy, and we stumbled over the line pretty much together. 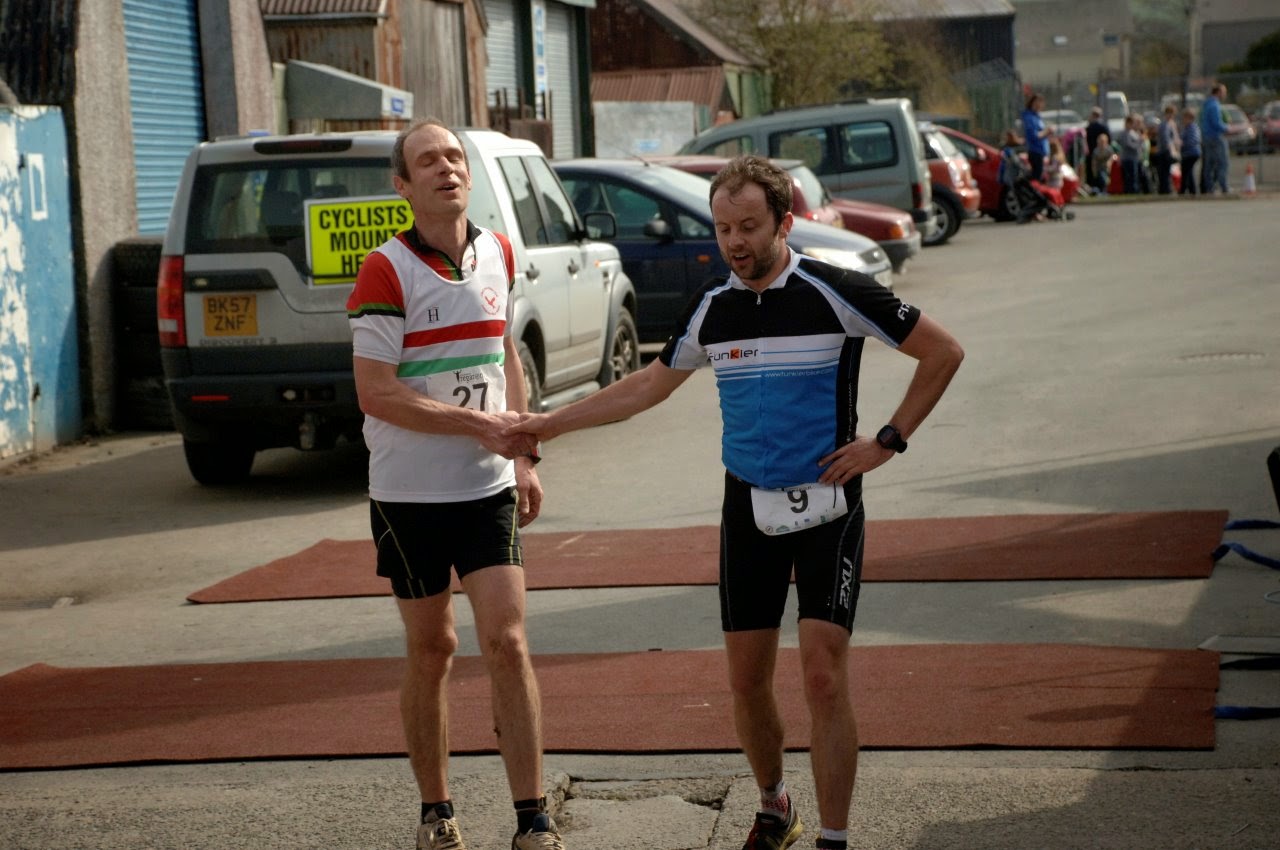 It was a superbly organised and very friendly event. Thanks, perhaps, to some European back-of-beyond funding, it was excellent value for money too, with the already low £15 entry fee getting you a natty goody bag and T-shirt and even a timing chip that worked properly. Most of Tregaron seemed to be out marshalling, with a hi-viz presence not only at every junction but also every couple of miles just to cheer you on, and the course layout meant that we passed the not-insignificant crowd of rabid supporters and bemused onlookers no fewer than six times during the race. You don't get that at MTB events, which is a shame because it really does give you a lift every time someone calls your name or gives you a clap or a well done or even a get a move on you fat lazy bastard. Thank you all for your encouragement!

What's so amazing is that the event was organised by complete first-timers from Tregaron's new bike club Clwb Seiclo Caron, formed last year around the same time as my club Sarn Helen reformed down the road in Lampeter. We'd still struggle to organise the proverbial piss-up in a brewery, so hats off to the Tregaron boys for popping their cherry in such style. Apparently an MTB event is on the cards for the autumn - I'll be there. 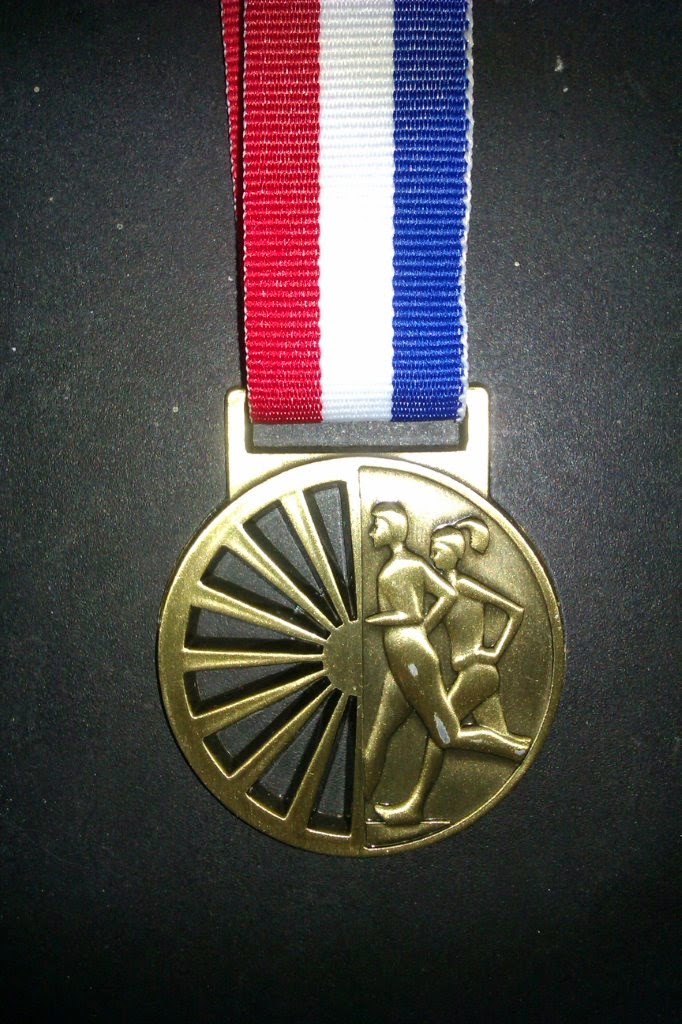 I'm glad I went and I'm pleased with the result, but I'm afraid I haven't been converted to road riding and I don't ever want to run again. 3-15-2 sounded very doable, and indeed I did it, but in practice it was seriously hardcore. I have a new-found respect for triathletes - combining disciplines is really tough. I already have a love/hate relationship with running (I love running, running hates me) and predictably the event left me with calves you could play like a harp, and I'm still hobbling around with an urgently-in-need-of-a-hip-replacement waddle. In hindsight, a little pacing might have been a good idea: going at the first run full-pelt (including my fastest-ever recorded mile) was possibly not the best strategy. While I'm used to racing up to four hours on the mountain bike, and I regularly run more than five miles, this event was just so much more intense. Unless you're mental (which probably includes me), I'd say a duathlon, like a marathon, is probably best treated as a challenge rather than a race. Which, in fairness, is what most people there did.

You know, I can only think of one MTB event where I've ended up quite as knackered as this - the Devil's Challenge last year. And guess what I'm doing this coming Sunday?