Empire Cycles Enduro Round 1: Going down for a whole weekend

Enduro is all the rage in mountain biking right now. At least that's what all the magazines say - you can't move for features on the latest enduro bikes and enduro helmets and enduro shorts and enduro guyliner. Positioned somewhere between downhill racing (feel no fear), cross-country racing (feel no pain) and everyday trail riding (feel like another pie), enduro manages to cut out the things I'm good at (climbing and covering long distances at speed) and focus on what I'm not so good at (descending at speed). So obviously I've just dismissed it as a passing fad for the young and the lazy and ignored it completely - until now.

Yep, last weekend I dug out my baggiest jeans, rotated my baseball cap, acquired some rad facial hair and some sick ink, levered a curtain ring into each earlobe, sourced myself a seriously big 'n' bouncy bike, and gave it a go. And, you know what, I was totally won over. 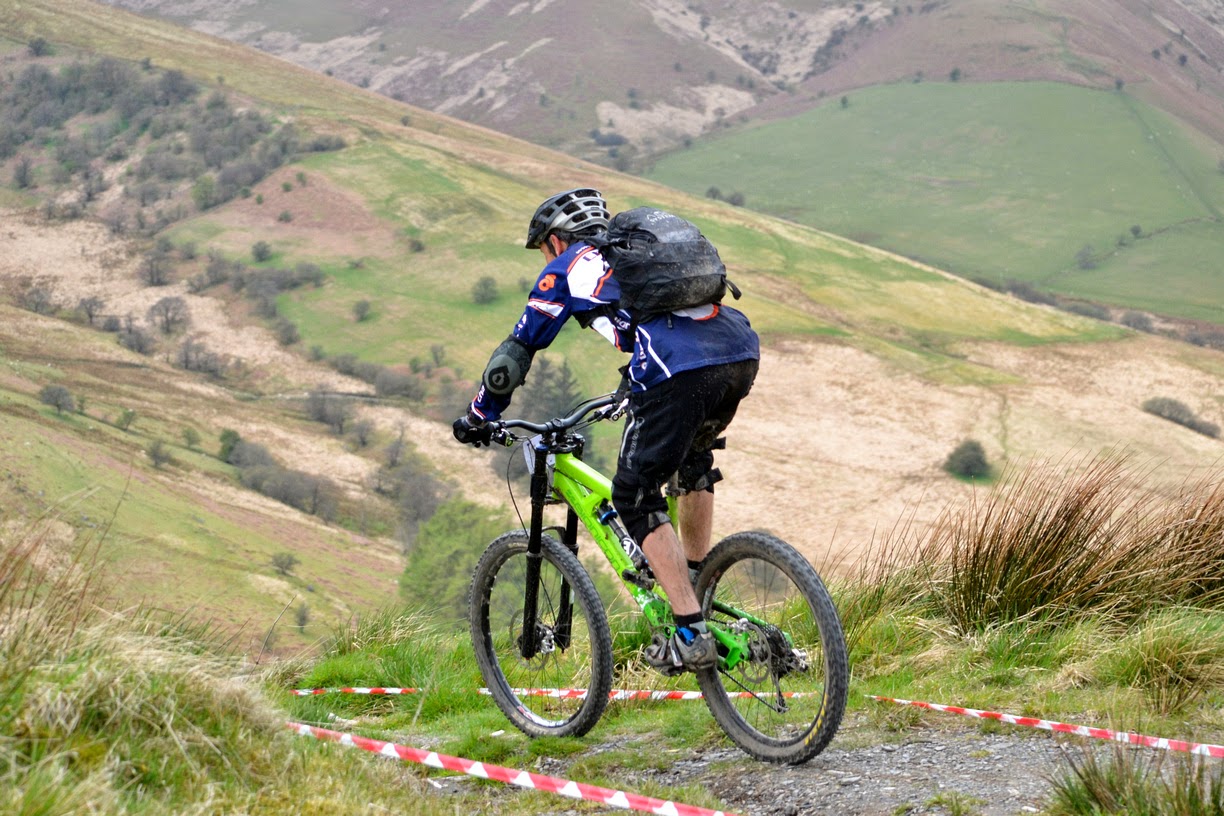 I’d say this pretty much sums up the weekend for me.
Cracking photo by Carol Corbett at CAC Photography.

The format seemed pretty undemanding – pootle, refuel, hurtle, chat, repeat for two days – and I arrived expecting a walk in the park for a lean, mean racing machine like me. But 50 km with 1,500 m of climbing is a fair old workout whatever speed you do it at – especially when you do it two days in a row interspersed with seven bursts of all-out sprinting and a largely sleepless night under canvas. I also failed miserably on the pootling front – you can take the boy out of cross-country but you can’t take the cross-country out of the boy - and I didn’t take anywhere near enough food. But I did OK on the chit-chat.

Saturday morning was practice on stages 1 and 2, which basically meant a 25km loop with a long fire road climb to the top of each stage followed by stop-start reconnaissance of the descent: ride slowly, stop, survey, walk back, man up, ride faster, proceed to next chunk.

Saturday afternoon saw a re-run of the same loop, only now the two descents were electronically timed. Although I’d plotted some good lines in the morning, I pretty much missed them all in the heat of the moment. Perhaps memorising/visualising the descents is part of the enduro skillset. But at least there were no nasty surprises - just the usual challenges of loose corners, ruts and excessive speed.

Sunday then brought one big 50km loop taking in five more timed stages: another stab at the first two, two new ones ridden blind at Coed Trallwm trail centre, and finally a third crack at stage 2 on the way back (the original stage 5 having recently been trashed by forestry machinery). 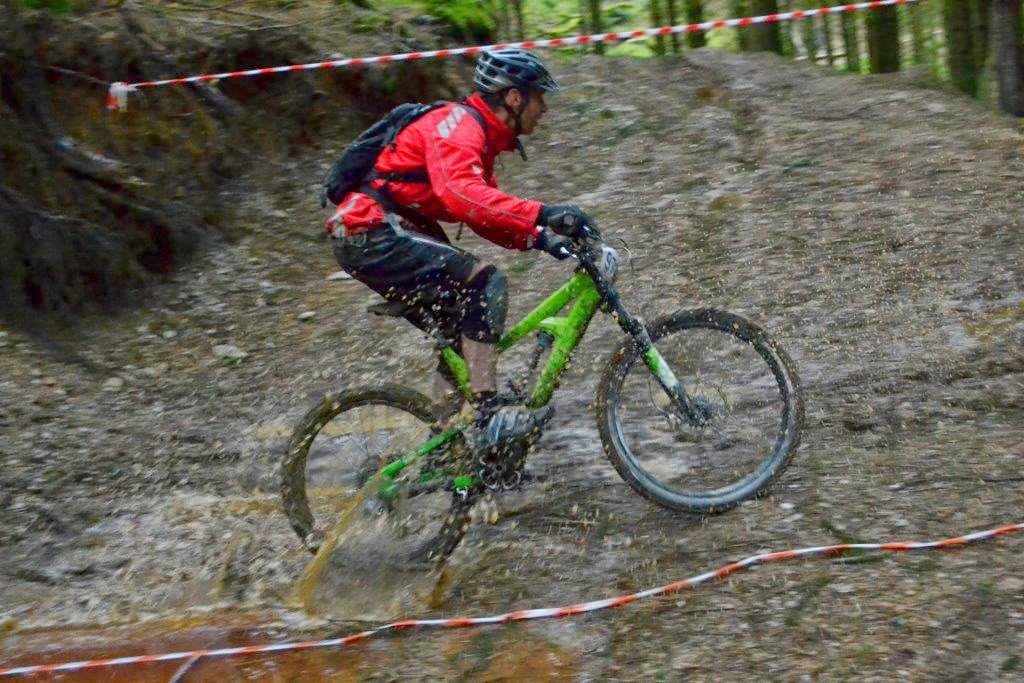 Each lasting 2-4 minutes, the timed stages were a mix of tricky and fast 'n' furious, with just about the right degree of technicality – enough to give everyone something to think about at speed, but not beyond the capabilities of the average rider if ridden with care:

Cwm Henog DH: Fast, winding trail with firm base, one steep section, odd slippery patch, shallow ruts. Seemed to induce the most whooping.
White Bridge DH: Tricky steep start over big roots, then fast loose gravel with ruts and sharp turns, a steep drop, some short sprints and a bonus slippery section at the bottom. A lot of mistakes made on the flat corners.
Coed Trallwm Red DH: Super-fast start with occasional sharp turns, then twisty, pedally and a short sharp climb in the middle. Smooth gravel surface. Surprisingly tiring.
Neil’s Old Skool DH: Muddy, rooty, unsurfaced downhill line cut down through the forest, really tricky from start to finish and very steep towards the end. Shorter than planned due to fallen trees. This stage had the better of almost everyone - including me - but was also most people’s favourite. 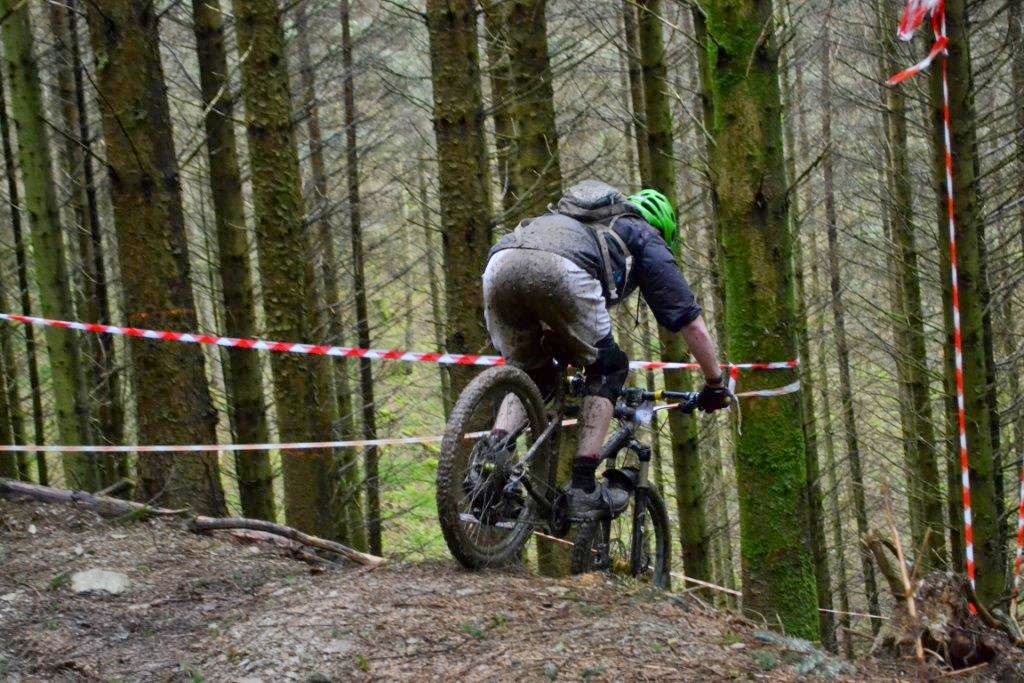 So how did I do? Much better than I expected - I took nearly 30 seconds off pro rider Matt Page’s Strava KOM on Cwm Henog and almost got the KOM on White Bridge too, which wasn’t too shabby. On the other hand, some of the other riders were 30-plus seconds quicker again! I managed to make a right hash of the old-skool stage, but at least I managed to slither down the steepest bit without dabbing and made it across the bridge at the bottom without falling off, unlike several others. Three things struck me watching the others come down that one: (1) it really was very steep, (2) you’re actually going quite slowly, and (3) the really good riders don’t half make it look easy.

Of course, there was a reason I was quicker than normal on the descents. While I was sorely tempted to do the event in lurid Lycra on my rigid singlespeed, that might have proved more moronic than ironic, so I went to the other extreme instead and borrowed an absolute beast of a bike from the very nice people at Bionicon: 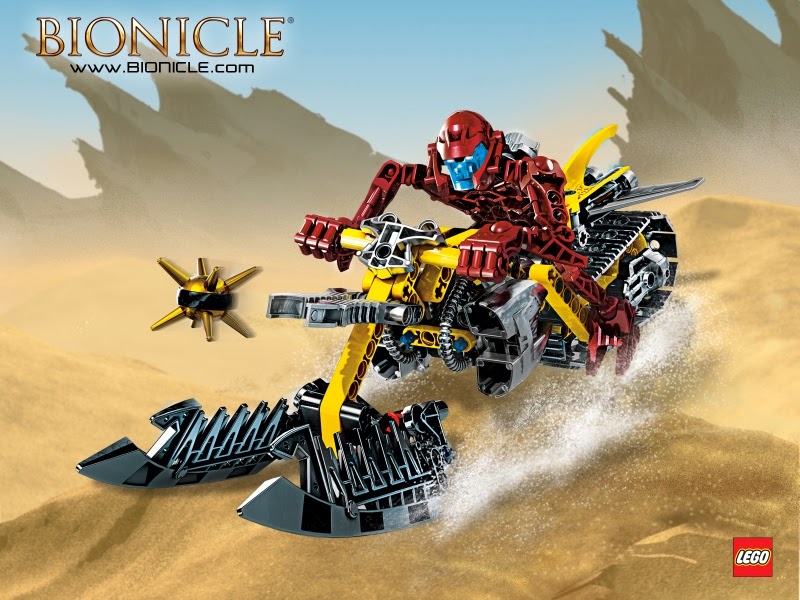 No, not a Bionicle, a Bionicon! 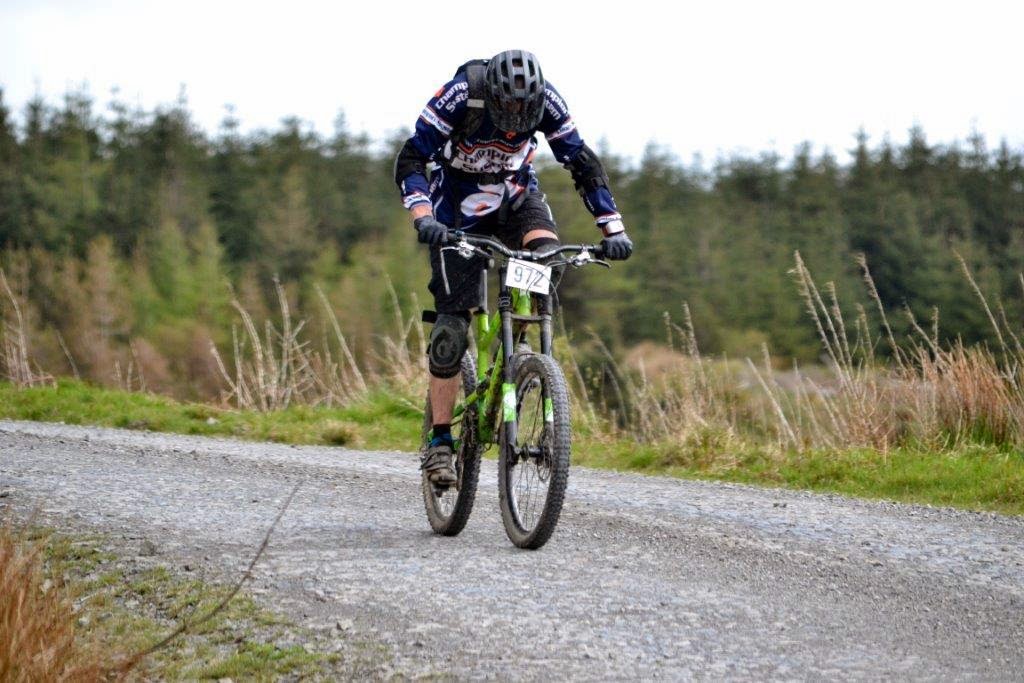 Yes, one of these: 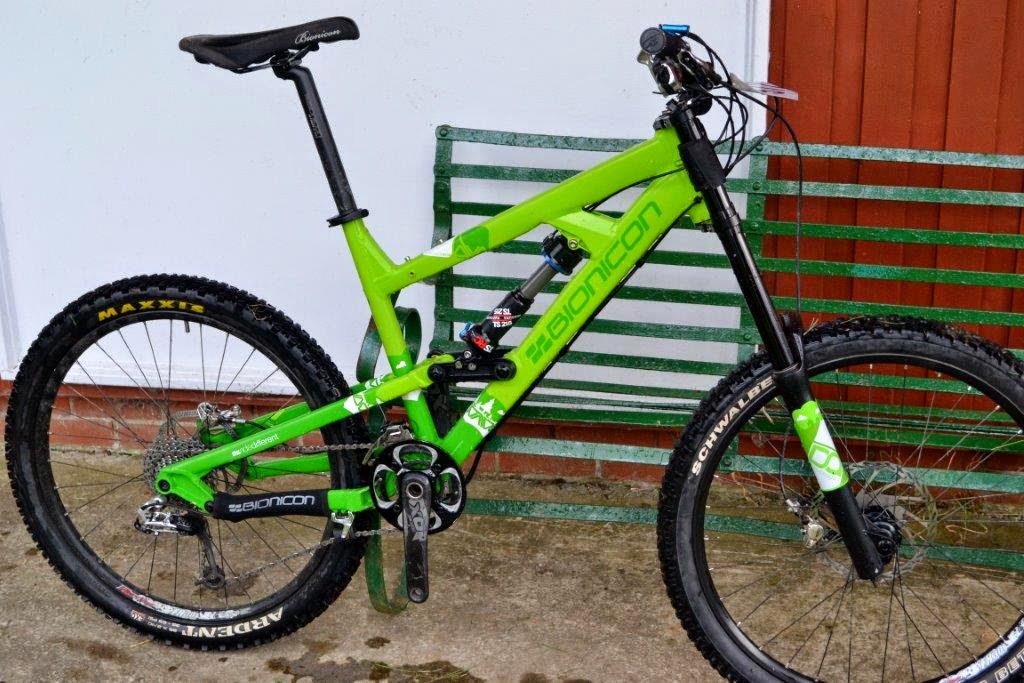 Phwooaarrr! Look at the forks on that!
Photo: Carol Corbett at CAC Photography.

The bike generated an incredible amount of interest. It looks like a downhill rig with those big triple-crown forks, but it also has this natty adjustable geometry that morphs it into trail mode for the climb back up. Compared to the lightweight XC bikes I’m used to, I still found it hard work getting up the hills – but on the way back down the Bionicon lived up to its name. It was like a monster truck cum hovercraft that gave you a permanent get-out-of-jail-free card as it made light of whatever the trail threw at you. It didn’t just smooth out the descents with its massive travel and slack geometry, it flattened entire hillsides – it was like the whole planet had shifted on its axis just for me. On that bike there is no such thing as steep.

Sadly, though, the Bionicon is not for me. Partly because I enjoy climbing, but mainly because I doubt I’ll ever have the balls to ride this bike as hard as it is clearly begging to be ridden. More capable hands could probably bring out the animal in it to frightening effect, but at my pace the ride ended up so smooth and well-mannered, it was almost like taking tea in the back of a chauffeured Rolls-Royce. I did have an absolute ball on it, though, and there could be a happy medium - I guess that’s what they call an enduro bike. 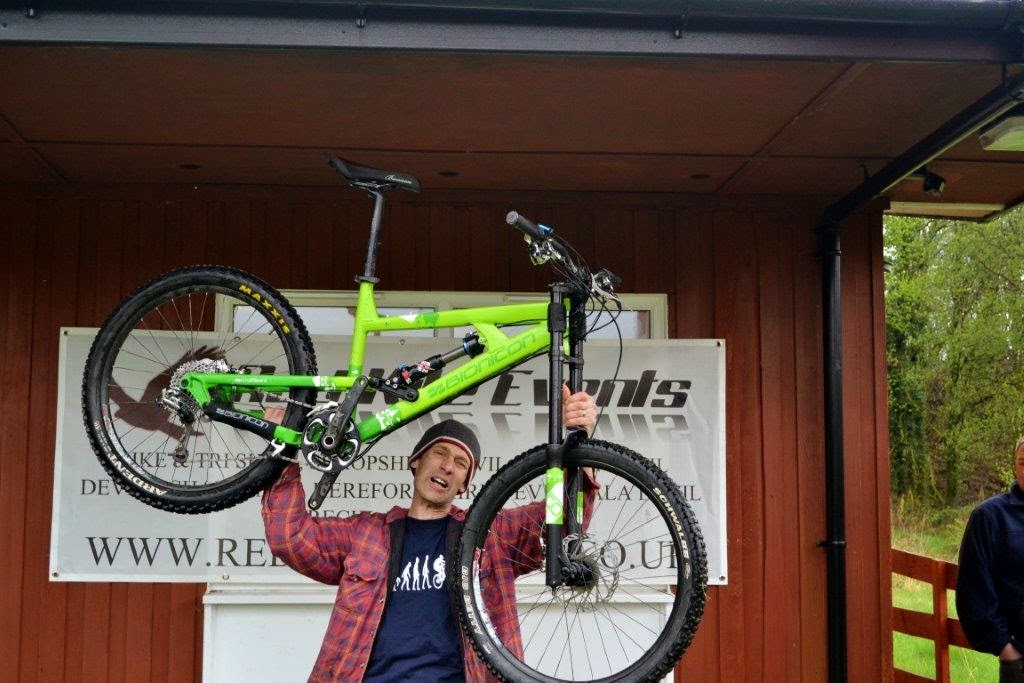 The bionic man! Truth be told, I almost dropped it.
Photo: Carol Corbett at CAC Photography.

So, apart from a weekend’s riding along picturesque marked trails in Wildest Wales with top-notch descents, electronic timing and medics on hand for emergencies, what do you get for your £50? Well, free camping with proper  toilets and showers (not normally my scene, but I tried it for the full enduro experience and rather enjoyed it), free pasta party (and not any old rubbish, we’re talking restaurant-quality food consumed in a restaurant, the Drovers’ Rest), energy drinks and bars en route, tea and toast at event HQ, a free beer at the end of each day, bikewash facilities… Oh, and this being a Red Kite event, you also got a free soaking on day 2.

But more than anything, there’s a real sense of camaraderie. Compared to XC and endurance racing it was like a breath of fresh air. I loved having the time to stop and help someone fix their bike (OK, so I wasn’t much help). I loved chatting up some of the climbs (“Haven’t seen you around before, I like your curves...”). I loved having the chance to set myself for a downhill run rather than launching straight down still panting from the preceding climb. I loved stopping at the bottom to savour and dissect the descent, to swap war-stories (anglers: it was thiiiiiiis big; MTBers: I was thiiiiiiis close), to cheer and heckle the other riders.

Of course, the timed stages are still racing and still all about me, me, me. But that’s only 20 minutes out of a whole weekend. Enduro is about us, us, us. I arrived on my own, but found everyone welcoming and friendly, especially after a cosy beer or two at the Drovers’ Rest on the Saturday night. In true Red Kite Events style, it was all a very relaxed affair. So when the timing system went down for an hour, resulting in an extended pit-stop at Coed Trallwm café, we just went with the flow (and stuffed ourselves silly with some seriously good Easter Passion cake - four levels of carrot and coconut sponge layered with mascarpone and lemon curd, just one short of my 5-a-day!). While this presumably wouldn’t have happened at one of the big corporate-backed enduros, who really wants to be herded along timed transitions with 800 other riders and set off on timed descents at 20-second intervals? There must be a happy medium, though, and it’d be great to see more riders at future rounds. Be warned, though, next time I might just be on the rigid singlespeed. 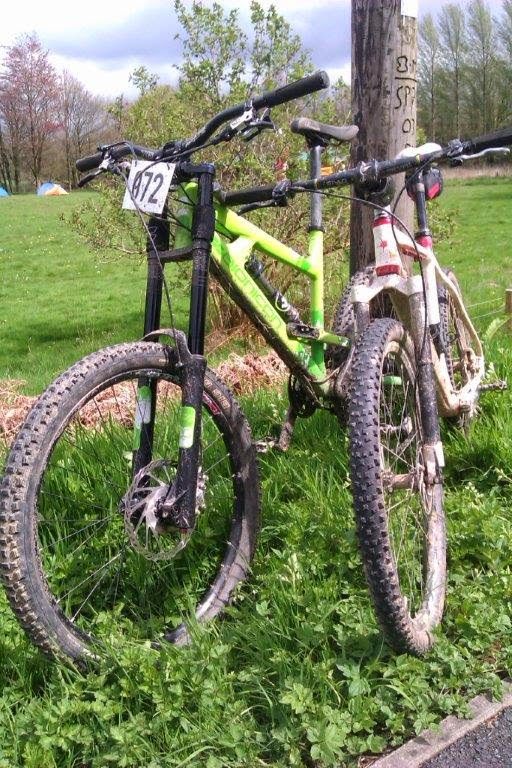