I seem to be cursed in this year's XC series:
So round 3 was very much last-chance saloon territory. If I didn't have a decent race without mechanicals, that was it. I'd stick to endurance events in future, no more XC for me.

I haven't had much luck in past Welsh XC champs either:
Admittedly I still bagged bronze medals in both of those years, at a time when I was, frankly, still a bit crap, but that just made it all the more frustrating last year when I only managed fourth place despite being way fitter and faster and nothing actually going wrong. Anyway, this time I was really fired up and determined to get back on the podium.

So what did round 3 and the 2014 champs bring?
Yep, no sooner had I hopped on the bike for a warm-up than the rear brake locked on with the lever dangling uselessly in need of an urgent Viagra infusion. Apparently it was something not readily curable to do with seals and return springs. Likely cause (get this): overheating in the back of the car. All I can say is don't ever let me get a dog! Anyway, big thanks to Gareth Rowlands from Cycle-Tec for the diagnosis and for helping to run round trying, in vain, to find someone with a suitable brake to borrow.

Decision time. Drive straight back home cursing and crying and maybe squeeze in a consolation ride locally on the singlespeed - or man up and race anyway.
So I decided to give it a go. Fforest Fields is always a climber's course anyway, and I could always run/abseil the scariest bits. But any chance of a result was gone. I surprised myself by cresting the first big climb in the leading group with relative ease, so I do now wonder what might have been... But then we started to head back down again and that, basically, was that. 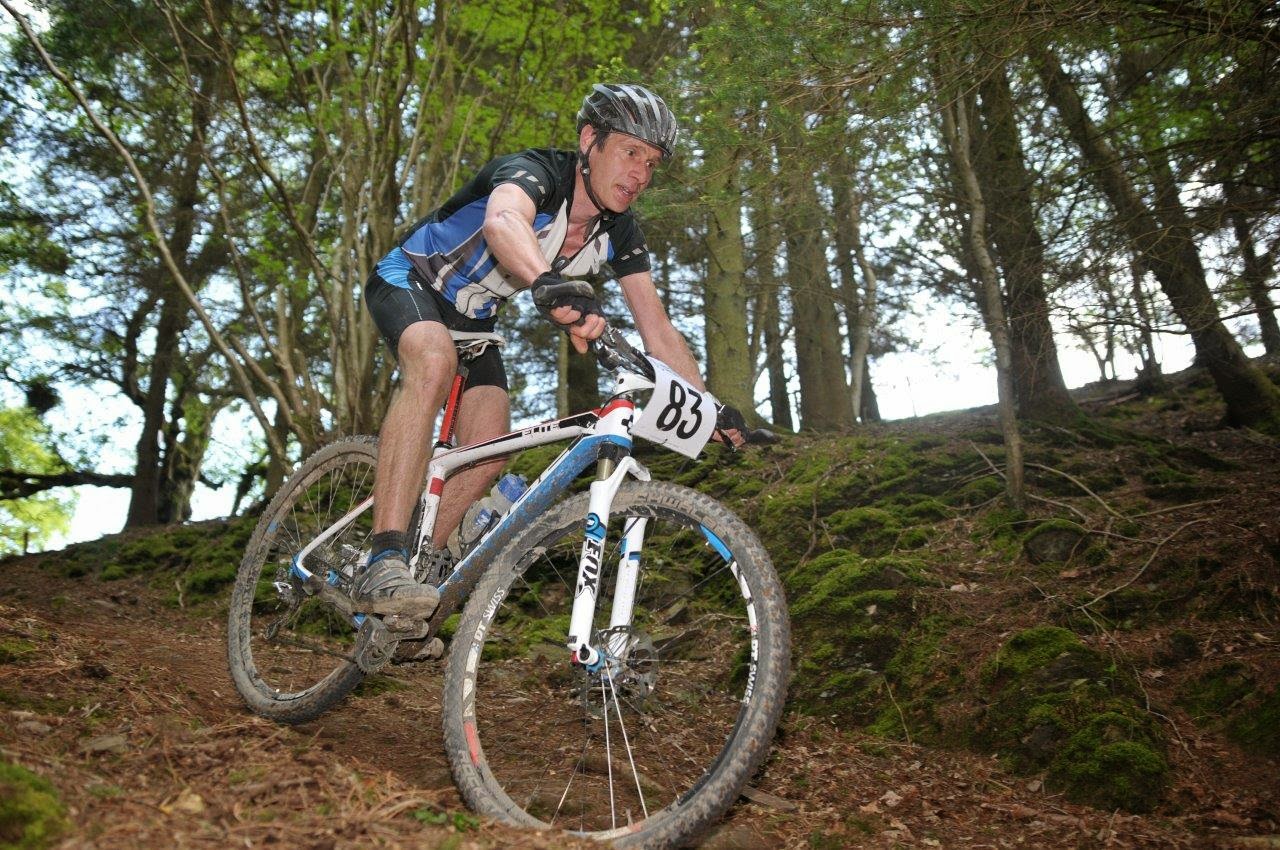 Note two-fingered death grip on front brake.
Great photo by Roy Bevis while taking a break from heckling me.

The problem with having only a front brake is three-fold:
And that's before you consider the effects on the mind - and I find descending fearlessly a challenge at the best of times. My initial approach was therefore to creep along at such a low speed that I wouldn't ever need to slow down. Which worked pretty well in terms of keeping me alive but had its disadvantages. Not only is going slowly not the ideal race tactic, but there were spectators and photographers on both descents, making it deeply, horribly, cringingly embarrassing.

Luckily the leafy loam and myriad roots were bone-dry and full of grip, so I was able to speed up somewhat each lap as I grew more proficient at hanging off the saddle to drive weight down behind, rather than over, the front wheel. I only went over the bars the once, and bounced well. The course was more tricky than scary anyway, so in the end I was happy riding everything apart from one short drop on the first descent (having gone arse over tit running down it on the first lap, I opted for riding the longer but easier B-line after that).

I felt really strong on the uphill sections, easily passing people on both climbs every single lap - only to have to let them past again on the descents. Come the last lap, though, I was so fed up with this pattern that I decided to lose the two guys I'd been playing cat-and-mouse with for the last hour by red-lining up the hills and easing off on the brake (sic!) on the descents. I even managed to pass another rider on the final climb and almost, almost caught one more in a lactic-tastic sprint finish (turns out he wasn't in my category anyway, so I was, like, whatever). All this made my last lap as quick as my first, which is unusual and testament to the power of bloodymindedness. 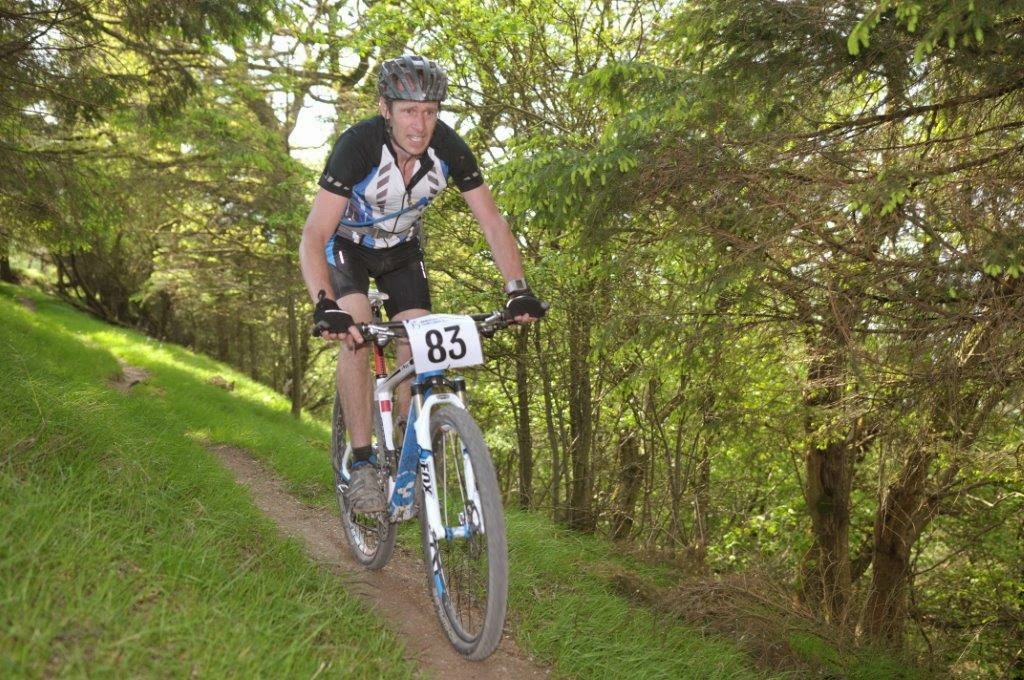 On the first lap I was even scared on the flat bits.
Photo by Roy Bevis.

Sixth in the race and fifth in the champs was disappointing, but looking at the times even with three brakes I don't think I could have stayed with the top three. Even so, I really enjoyed the ride. Dry trails always help, but against expectations it was a gem of a course. I found it a bit dull last year, but a new rooty descent, a carpet of bluebells and a bit of tweaking worked wonders.

So, am I now going to flounce out of XC racing for good? Well, I'm still thinking that 70-80 minutes is just too short. By the time you've driven there, faffed, raced, faffed and driven home, you could've had a whole day's riding from your door - and unlike in longer races it's nigh-on impossible to recover from a puncture or mechanical. On the other hand, a really good course like this one can still make it worthwhile. I also have unfinished business - I'd love to have one clean XC race this year to see what level I'm really at. I feel faster than ever.

So, one more race, a really good course, let me think... Seems all roads lead to the British Series race at Margam on 15 June!

Before that, though, I have a big wilderness ride lined up in the form of the Red Kite Events Devil's Challenge 130km on 8 June. I probably won't come out of that one complaining it's too short.

No Strava today - stupid Garmint packed in as well!