I very nearly passed on this one. I awoke, feeling dog-tired as I had all week, to some seriously wet 'n' windy weather back home in Ceredigion; that afternoon I was committed to a friend's birthday bash consisting of two hours of clambering over and through 101 uses of old tractor tyres, slithering commando-style along a labyrinth of muddy ditches, dodging leeches and generally trying not to die of exposure, on a faux army assault course in Pembrokeshire; that evening I would spend three hours driving through torrential rain to my MBLA Trail Cycle Leader assessment the next day in Conwy (which I somehow managed to pass despite my brain still being numb). What swung the decision in favour of adding Powys to this impromptu Grand Tour of Wales was my wife telling me that I'd be mad to do it. Red rag to a bull or what?

The weather clearly did put off a fair few riders, though, which was a shame as this is hardly a fair-weather sport. But it was still a respectable turnout, with a pretty comprehensive range of abilities, bikes, disciplines, ages and genders along for the ride.

I think the grand old Duke of York might have had a hand in designing the course. Yep, we rode straight to the top of the hill and then straight back down again. Seven times, over a period of 90 minutes. Rather like a downhill uplift day only without the uplift. Hence this Tobleronesque elevation chart:

With no flat bits to catch your breath and refuel, it was really hard work. The usual big fireroad climb led straight into a fast and furious descent which offered precious little respite, and then it was back up the hill again. A full-on, all-out 90-minute sprint. On the one hand, lots of short laps like this means there are always riders around you to spur you on, rather like in cyclocross, and gives you plenty of chances to perfect your skills (or not) on the bits you get wrong. On the other, it meant that we spent more than two-thirds of the race climbing, and up a featureless fireroad to boot, which is always an acquired taste. Although this imbalance probably favoured me now that I'm fit as ****, it was a bit tough on the weekend warriors out there. Bring back the flat bits, Neil!

The first part of the descent initially appeared in rounds 2 and 4 of the last winter XC series at Coed Trallwm earlier this year, as documented here. I reported then that I thought that next time I'd have "the confidence and technique to ride it in the wet". The reality, sadly, was that apart from the first lap I was once again like Bambi on ice on those off-camber roots. I only came off the once, but had to make extensive use of a supporting foot or two, trimaran-style.

Next came a revamped version of the main descent on the centre's black trail (the trails here are open to the public all year). Whereas previously you hurtled faster than you really wanted to straight down a rough and ready logging track, you now have to contend with added dips, jumps and, er, bus stops. I too wondered what these might be, but the name actually makes a lot of sense. Essentially you are briefly channelled off onto a bank or into a hollow on one side of the main track and then back again, thus slowing you down, introducing a need to steer rather than just cling on for dear life, and giving you further opportunities to indulge your inner child. A welcome addition. More bus stops please, Neil!

Video of the course by Tom Stickland whose own report on the race is here. The tricky part of the descent isn't included so I can only assume he didn't manage to ride it cleanly either!

Race-wise, friend/nemesis Gareth Payne turned up, so another win wasn't on the cards. He and young Carmarthen rider Carwyn Davies shot off ahead at the start, so I just set about rollin' along in that ol' singlespeed rhythm, and was surprised to find that I soon passed Carwyn and reined in Gareth, pushing him to the top of the climb. I then kept up with him all the way back down, which was a welcome novelty. Meanwhile Carwyn somehow managed to catch and pass us both halfway down - respect! The man clearly knows no fear. And then, before we knew it, we were onto the second lap and back on the climb. Again I quickly overtook Carwyn and was neck-and-neck with Gareth right to the top, but this time Carwyn didn't catch us on the descent.

On the third lap, Gareth started and finished the climb with a small gap that I couldn't close, and I managed to fall off on the descent, nothing serious but enough for me to lose touch with him. By the time I hit the climb for the fourth time, Gareth was way off in the distance, and from then on it was a case of trying to hang on for second place, never knowing how far Carwyn and the others were behind me.

With such short laps, we were looking at seven reps of the big climb, and I have to admit that worried me, as I've tended to struggle here on the singlespeed after a few laps, forcing me to jump off and walk. Not this time! Maybe it was the reward for all those long summer rides. Or maybe it was all down to picking off stragglers from the third lap onwards. I might have felt like my legs were about to drop off, but I was still going a lot faster than them, so things couldn't really be that bad. And, of course, when you lap someone, you're duty bound to say something encouraging/witty (or at least respond to their "Give us a tow, mate!") without looking and sounding like you're having a coronary. Having to make great chunks of the climb appear totally effortless like this certainly saw me through some hard times on laps 4 and 5. Oddly, though, the hill didn't bother me at all on the last two laps - I had a good rhythm going and concentrated mainly on descending better (Strava tells me I didn't).

I eventually came in a couple of minutes clear of Carwyn Davies and Ross Farley, who have both beaten me this year, so I was very pleased with that. Carwyn (and maybe Ross) had done a cyclocross race in Carmarthen the evening before, which might explain why I had the edge on the climbs, so I might have more of a fight on my hands next time. The best thing, though, was pretty much keeping up with Gareth and Carwyn on some of the descents. I'm getting there... 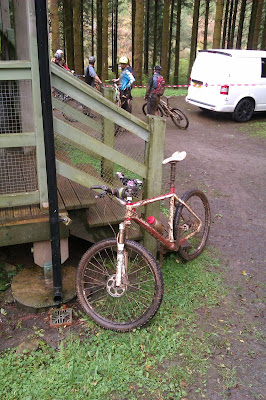 Queuing for the bike wash. Failed attempt to capture the hugely enjoyable muddiness of it all.

One of the (few) advantages of being permanently behind on my blogging is getting to see what other people have to say about an event first - and a chance to comment on it. For example, here's Tom Stickland on the three riders who lapped him in this race: "Fast xc racers aren’t normal people so I wasn't too bothered." And: "The first 2 in my category were bonkers quick." Never before have I been so proud to be considered a freak!

I still have plenty to work on, but I'm delighted with the progress I've made over my three years on a mountain bike, especially this year following that mad decision to buy and race a singlespeed. How much better I can get, I just don't know. Age is not on my side, and I have neither the time nor the inclination to train properly, but I'm loving every minute of the riding I do manage to fit in.

And now it's time for a confession... As I say, I'm getting a bit behind on the old blogging, but readers with a crystal ball will already know that in future blogs I will admit to having gone over to the dark side and competed in two events prior to this one on a bike with 29" wheels and 30 gears. Boo, hiss! I took the singlespeed to Coed Trallwm partly for comparison, partly because I knew there wouldn't be much in the way of flat bits (but little did I know there would be none!) and partly because I needed a clean bike the next day for my MBLA Trail Cycle Leader assessment (which I passed, did I mention that? Anyone want guiding around the hidden gems of mid-Wales? A bit of coaching for beginners? Bookings now being taken for school parties, birthdays, stag nights, weddings...).

So, did I miss the gears? No. Did I miss the big wheels? No. So was my new triple-ring ten-speed 29er a waste of money? Find out next blog :-)

The second round of the Red Kite winter series is on Sunday 24 November. Be there or be square. There is something for everyone - racers, normal people, kids. It's all about life's less complicated pleasures - a big hill, a whole lot of mud and a nice log fire at the end. What more could you want?