If I had to sum up the day in one photo: 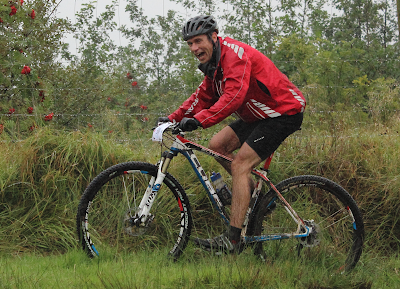 My reaction to dismounting unexpectedly on boggy ground seconds before (see below). Note deployment of waterproof jacket in a race (yikes!) albeit only for the first lap until I warmed up.
All photos: The intrepid and clearly web-footed Christopher Bentley

As I may possibly have mentioned before, I love Margam. And the Madness was my favourite race of last year - a testing course on a rare sunny day. This time, though, the weather gods weren't playing ball, and the whole day was spent stuck in a big wet bastard cloud. Up top, visibility was best measured in inches, and everywhere it was damp and drizzly, turning parts of the course into a squishy quagmire. Despite the adverse conditions, it was far from a miserable ordeal, thanks to a well-designed course with challenging climbs and wild descents, and a relaxed and welcoming atmosphere - from the friendly sign-on to the world's most encouraging marshal at the course's spaghetti junction to the handshake from the organiser as you cross the finishing line. 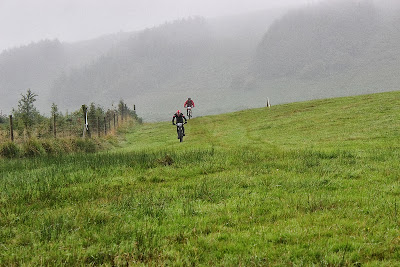 The eagle-eyed may have spotted a mention of 30 gears above. Yes, I caved. Relentless peer pressure and bitter disappointment at the Brecon Beast left me weak and vulnerable, and the right bike came on the market at just the wrong/right time. Fear not, oh bearded ones, I have not entirely lost the faith, as I have since raced on the singlespeed again (see my last blog - I'm getting out of sync) and plan to do so again.

One of the two big advantages of racing a singlespeed is its low weight - you don't have all those chain rings/sprockets/shifters/derailleurs/cables weighing you down on climbs. However, the ex-team triple-ring 29er of which I am now the proud and penniless second owner may have big wheels and lots of gears, but is clearly made of tissue paper as it's exactly the same weight.

The other advantage of racing without gears is that you don't have the option of taking it easy and changing down into an easier gear, so you have to go full pelt the whole time. Until you get tired, of course, when this turns into its biggest disadvantage, as I've found in my three XC races at Margam on the singlespeed this year and even on the 8-speed at the Madness last year, when I had to walk a fair few climbs.

No doubt about it, Margam Madness is a tough event. The climbing isn't massive in terms of metres, but it's pretty steep and pretty intense, with the whole race done close to XC speed. In other words, you go the same pace as for a two-hour race, only for four hours, which obviously makes the second half of the race pretty bloody tough. If you won't take my word for it, read here what European 24-hour champion Huw Thomas made of it last year - and that was without having the energy-sapping properties of wet grass and mud to contend with. 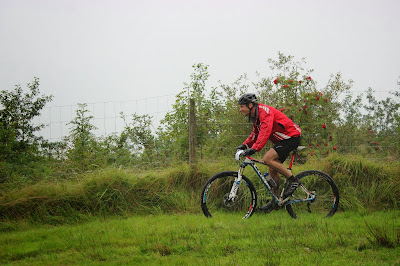 Anyway, enough of the excuses, I hear you cry, worrabout the race?

A fast flat start to the race saw me take advantage of my newfangled technology and actually keep up with the pack, but this led into the wooded section of the XC loop in reverse - read slippy tricky singletrack that had people stalling and hopping off all over the place and spread the field massively. It was frustrating to be stuck behind people cocking up the roots and steps, but I didn't fare any better myself, on the first lap at least. Fortunately I had a bit of space for the first hairy feature of the day, a short descent through some rhododendrons that required you to duck below a low branch, slide through a sea of porridge round a big bermed corner and then commit to skiing down a chocolate fountain onto a fireroad where you had to turn on a penny to avoid getting overly close and personal with a tree. You gotta love it.

Not so keen on what happened next, though. Some helpful child or dog walker had removed a sign after the leaders had gone through, sending the bulk of the field the wrong way. We soon realised this, regrouped and headed back to where we thought we should have gone - which was also wrong but did eventually get us back on track. I don't think it made any difference to the final placings, as the leaders were faster throughout, but it certainly skewed the times for the first lap by 3-4 minutes (see below).

The rest of the lap was similar to last year's event with a couple of added bits. The main climb from the XC races that I could only manage for a few laps on the singlespeed? No problem with gears. The rooty bits through the woods at the top? No problem with gears. The big climb from the ford out the back of the park? Still an absolute pig, but at least I could alternate between seated and standing. The long drag up to the trig point? Way harder than on the singlespeed - I missed my bar ends. 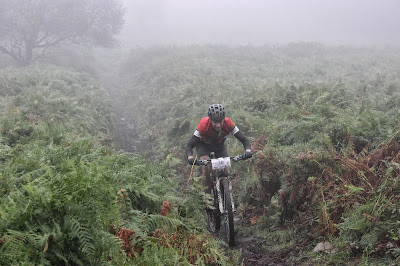 And the descents? Well, the rocky chute inevitably became a muddy chute, but I'm getting quite used to it now, to be honest, and the main hazard was other riders walking down. Rhododendron Riot still leaves you deliciously out of control towards the end. The two steep, narrow and increasingly gloopy singletrack descents at the back of the park saw me make the odd detour into the bracken, and I came within a hair's breadth of going over the bars in front of the cameras on the roots on the last lap, but ultimately I managed to stay on the bike throughout and get in plenty of practice on the old ski turns.

I did fall off once, but not on a descent. End of the first lap, innocuous flat section through the grass, got caught in a hidden rut and went over right in front of a photographer - oops! 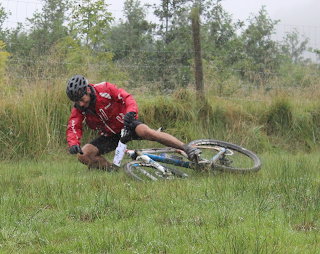 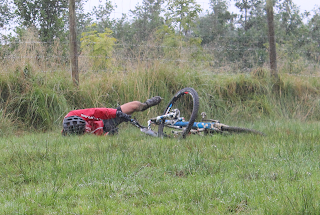 I almost went off again on the last lap on the vertiginous Kidney Shaker descent down to the finish. I slid sideways, stuck out a leg to steady myself and was paralysed by the most crippling cramp in my right calf. I ended up having to drop onto all fours right across the trail, one shoe still attached to the bike, and just wait there for what seemed an eternity until it eased. I'd been fighting off cramp for well over an hour by then; the damp conditions and fatigue doubtless played a role, but I reckon it was mainly down to the gears using my leg muscles in new ways.

After the first lap, the field spread out and I was surprised to find myself snapping at the heels of last year's winner Huw Thomas for a lap, but he eventually pulled clear and the second half of the race was quite a lonely affair, lapping the odd rider but generally having no idea who was in front or behind or by how much, as visibility was so poor on the open sections. I was a tad disappointed to finish 4th in category after making the podium last year, but pleased with 6th overall, and I was only 80 seconds behind Richard Samuel, who was first vet last year. It's hard to draw any conclusions about the performance of either rider or steed in such testing conditions, but the Cube definitely enabled me to stay on the bike more than usual - both uphill, thanks to the gears, and downhill, thanks to the 29" wheels with their extra grip and smoother ride. I might have been faster on the singlespeed - but only until I had to start walking...