It was always going to be on the extreme side, riding 35 miles up and down big hills in the wildest wilds of Wales in the midst of winter, plastered with mud, soaked to the skin, chilled to the bone, cramping all over and begging for mercy.

And as usual Red Kite Events had thrown in some pretty hostile terrain along the way that seemed hell-bent on killing you. Assuming you managed to avoid dying of boredom on the world's longest fire road climbs or drowning in the world's coldest puddles, the alternately muddy/icy/rooty/loggy descents then did their damnedest to fling you into the abyss - and that was even before you got to the malaria-infested swamps with their giant mutant leaches and man-eating crocodiles.

Now while all this dicing with death was of course hugely enjoyable, somehow I don't think it's what this event will mainly be remembered for. 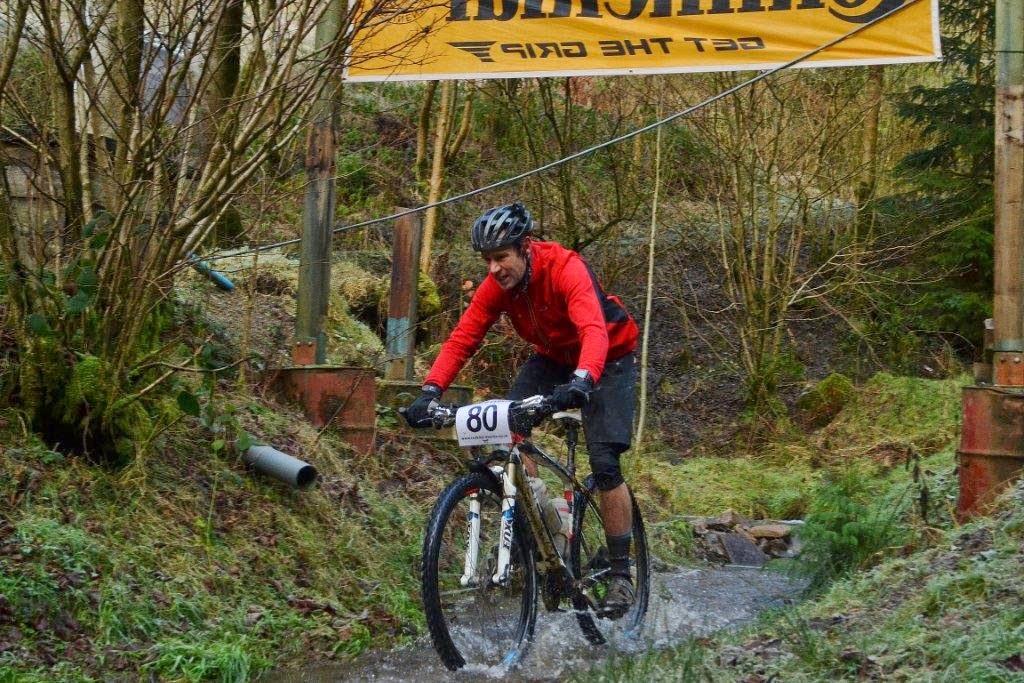 Near the start at Coed Trallwm. Photo courtesy of The Valley Photographer, who somehow contrived to get cold and wet despite never venturing more than 30 feet from the café...
Another 450 photos here.

Red Kite Events have long claimed to have the best feed stations around thanks to their partnership with the award-winning Drover's Rest restaurant in Llanwrtyd Wells. And with some justification, although A Cycling's home-made cakes and soup could definitely also stake a claim after the feast they laid on at Cross Mountain.

The problem with feed stations, though, whatever the quality and variety of the food, is that they are never going to be more than a couple of grub-laden tables perched in the middle of nowhere, generally the bleakest and most inhospitable point on the whole course, so you just don’t want to hang around. You quickly stuff a couple of flapjacks in your mouth, furtively shove a few more in your pockets that you then forget to eat (I once found a feed-station banana in a coat pocket when I got my kit out of the washing machine… and ate it), quickly top up your water and ride straight off again into the sunset before the wind-chill freezes you into Iceland party food. 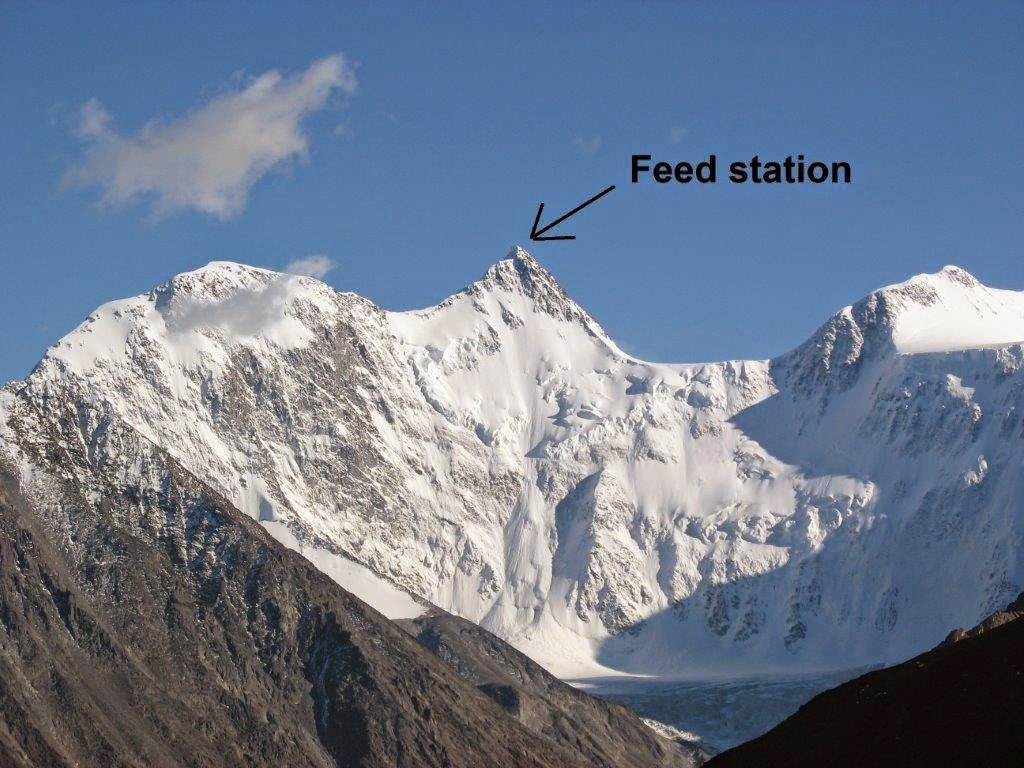 Drover's Rest proprietor, award-winning chef and all-round good guy Peter James, a man with more letters after his name than in his name thanks to his services to tourism, came up with a solution. Why not invite riders into his nice warm restaurant conveniently situated halfway round the course – and, what’s more, feed them a proper dinner? 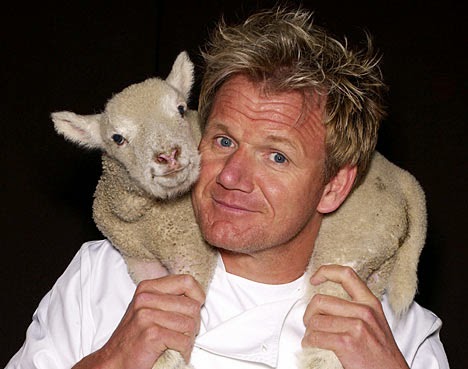 Peter James about to prepare dinner.

Let’s just get this straight. On a rare day when he was not up at Buckingham Palace collecting another MBE, Peter
Just to make it absolutely clear, he took this: 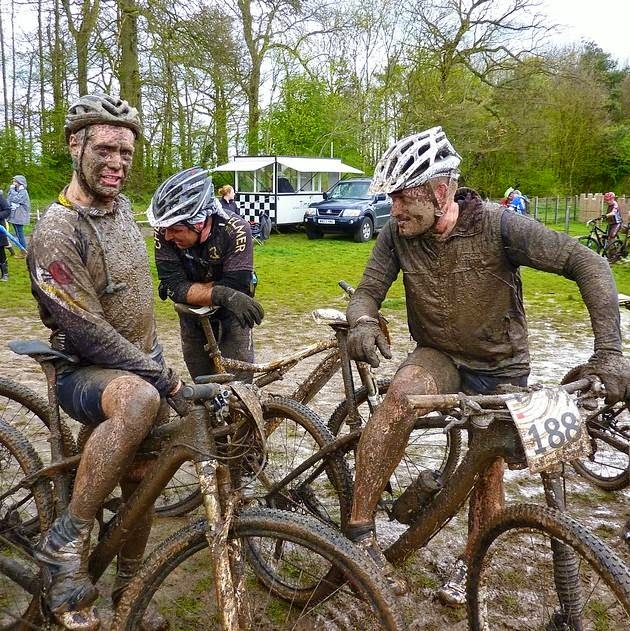 Because after riding 30 km up hill and down dale through mud, puddles and the odd patch of snow, we weren't exactly dressed for dinner. OK, the restaurant has a stone floor, so all he had to do was go all feng shui and stack the tables out of the way, pop a buffet along one wall, and get busy with the mop afterwards.

But no. We arrived to find tables laid, napkins origamified, the works. Peter was offering us a proper sit-down meal… And all that protected his lovely restaurant from our muddy behinds was a sheet of newspaper on each upholstered chair (rather aptly, it was the Daily Mail, which is, of course, only fit to wipe your arse with).

Apart from the best china, Peter also laid on his hottest waitresses: 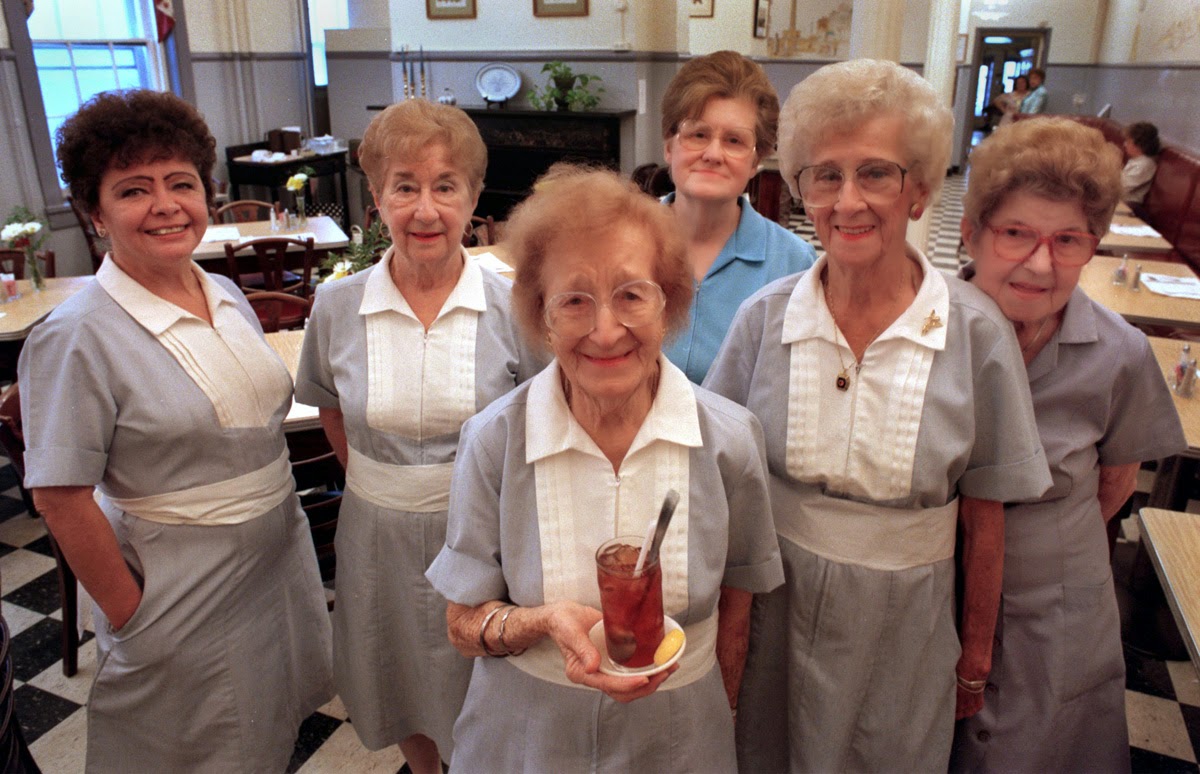 Oops, wrong pic. How did that get out of my private collection? No, I'm sure this is the one who served me: 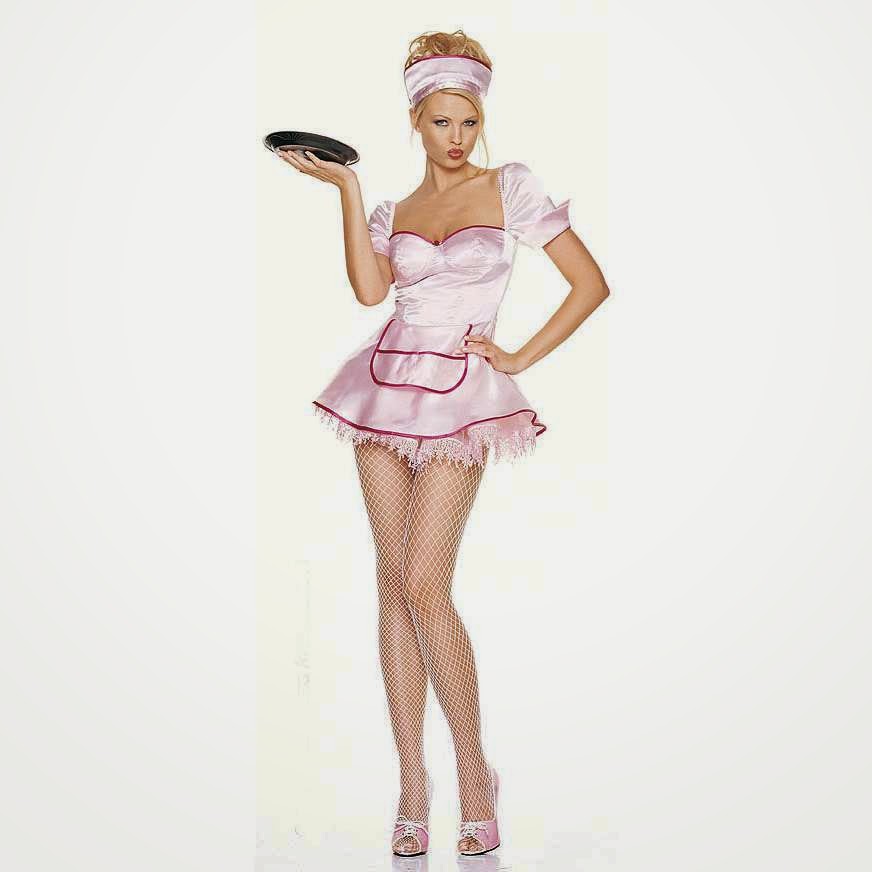 It might as well have been one of the first bunch, though. After 30 km in wintry conditions, let's just say every extremity was verging on frostbitten...

It was all a bit surreal. “Tea or coffee?” asks one waitress. A cafetière magically materialises. We sit down, gingerly, as though we all had piles. We sip from proper cups, with saucers, and genteelly crook slowly thawing little fingers. “Fresh parmesan on your pasta?” asks another waitress. “Warm ciabatta roll and butter?”

We are, of course, ravenous and the food soon disappears. And then comes the big decision: to stay or not to stay. Leaving the welcoming bosoms of the Drover's Rest was not going to be easy. Baby, it was cold outside.

But then Jon Roberts announced he wanted to leave before his legs (at least I think it was his legs) stiffened up. So I had to go too. And so did Jared Linden and Nick Reese. Strange as it might seem, and it seemed very strange at the time, the four of us were halfway through a keenly fought race, you know. It was all rather like that Christmas Day truce in World War One when the two armies downed arms to play football.

And it must have looked like the Somme too by the time the other 100 riders had been through. I think everyone’s favourite restaurateur will have to scratch Cleanest Restaurant Furniture of the Year off his list for 2015... and settle for another trip to see Ma’am, this time maybe finally bagging that elusive knighthood for services to hungry mountain bikers. 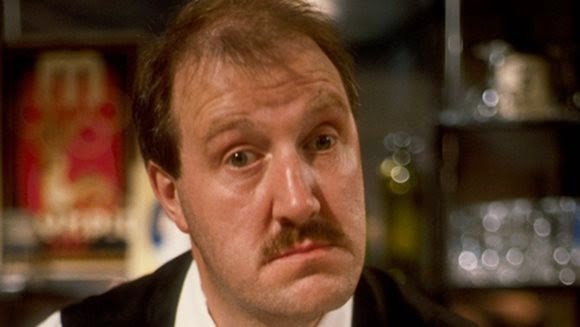 I think everyone loved the idea of a proper sit-down meal as part of the event – it’s great to catch up and swap war stories over a decent bite to eat - and everyone enjoyed it. But the consensus even among the more casual riders is that it would’ve been better to have it at the end after we’d cleaned up. I know for a fact that some of the riders doing the event are complete animals - you know who you are - but even they felt a little sheepish sitting there in a sea of mud and sweat fumes.

Meanwhile, the truce was off and it was back over the top. Young Jared soon disappeared off ahead; Jon, Nick and I were together for ages, but on the last big fire road climb I started to drop back due to cramp. Although I caught them up on a mad technical dash up what is normally a wild descent, packed with monster puddles and rocky steps and no end of mud and roots and all the other things I love about mountain biking, I then lost them again to reach the finish a couple of minutes adrift.

So in the end I was second on the morning’s official timed section; third before lunch; and fourth after lunch. Confused? I’m still pretty dazed as well.

The event was extremely tough. Too tough for many, with half the starters failing to complete the whole course. The descents were all pretty wild and a lot of fun, but in the Irfon Forest you do really have to earn them; it's not as compact as the Crychan Forest down the road, but then it does get you that much more "out there". 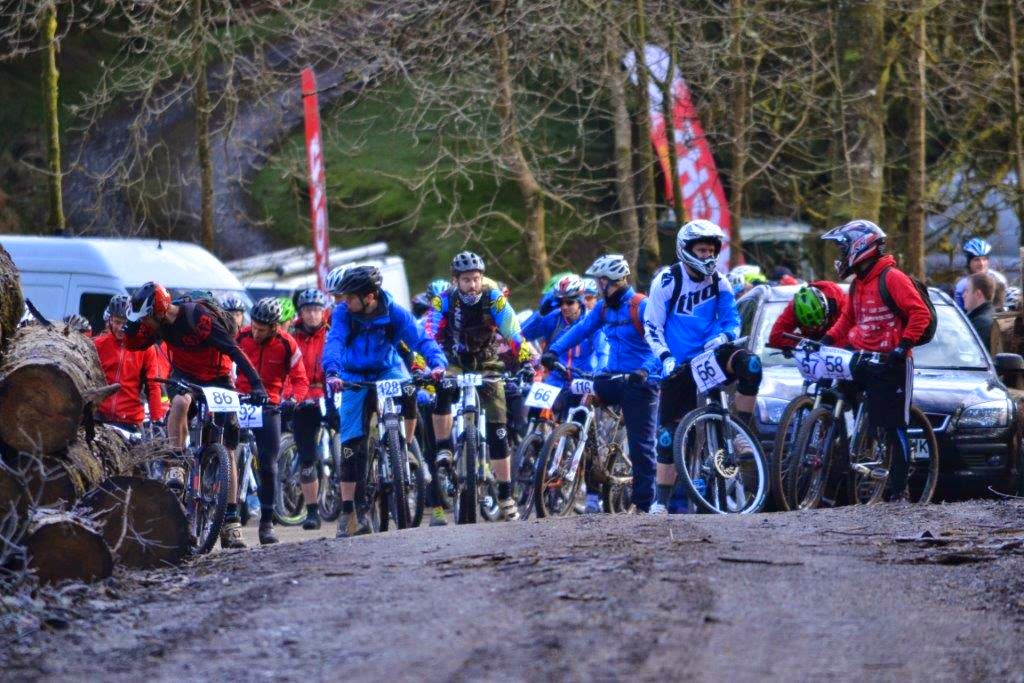 The event attracted every kind of rider. Photo courtesy of The Valley Photographer.

Red Kite Events supremo Neil Delafield tells me he wants to be known for extreme events where merely finishing is an achievement. And I have to say he’s doing a good job. I’m pretty fit these days, but I hurt every bit as much as anyone else out there by the end. I finished smiling but absolutely drained and riddled with cramp. I haven't been that knackered for ages. Nice one.

So I’m looking forward to the similar Little Devil event on 29 March starting from Bwlch Nant yr Arian near Aberystwyth.

Top 10 on the timed section (I only came second because Jon fell off):