Struggling to find much to say, for once, so I'm going to keep this one short and sweet, unlike the race (ho, ho). Not that there was that much wrong with the course, the organisation, the bike, the weather or my performance. It was just nothing special. I rode up and down some hills as fast as I could, fell off a few times, got a bit muddy, all the usual stuff, end of story.

In fact, it's tempting to limit this to a photo feature, courtesy of the wonderful and nigh-on omnipresent Mr Bevis, a man with an peculiar fetish for spending whole days lying around in muddy places: 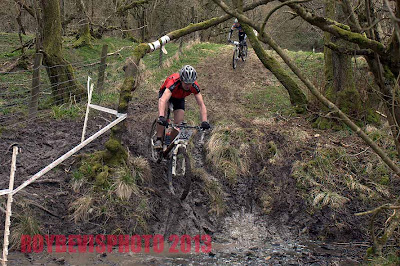 "OMG, if I get stuck in this mud I'll end up in the stream!"
(It was muddier than it looks) "OMG, if I don't change direction fast I'll end up in the stream!"
(It was tighter than it looks) 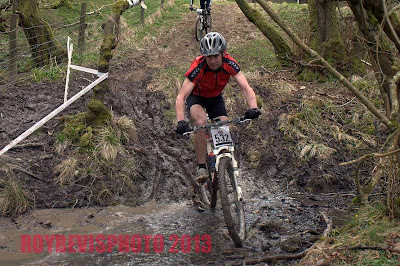 "OMG, if I don't make it up the bank I'll end up in the stream!"
(It was steeper than it looks) 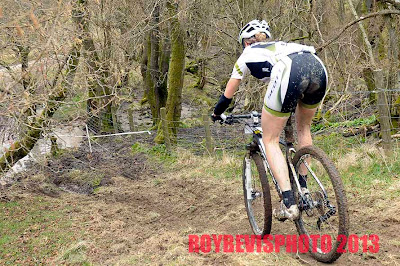 However, there are just a couple of things I need to get off my chest:

For once I warmed up properly. I arrived at the start exactly one minute before the allotted kick-off time, stripped down to an admittedly optimistic short-sleeved top and shorts after spotting a ray of sunshine - and proceeded to spend more than 15 minutes being shunted back and forth like Thomas the Tank Engine's grumpy coal trucks as the commissaires organised and reorganised and gridded and regridded all the different categories. By the time us wrinklies started, my heart rate had pretty much flatlined and I was shivering like a jelly on a wobble board. Not good.

And what exactly was the idea behind gridding us five across on a track only wide enough for three abreast? Given that we then headed straight into an open field, we might as well have lined up there 50 riders across. What difference can a five-second head start possibly make over a 90-minute race?

All the difference, it would seem. As soon as we got off the track, nearly the entire field went sprinting past me in a desperate lemming-like urge to get a good start. Only when we then turned onto the inevitable fireroad climb, the ol' singlespeed rhythm kicked in and I promptly sailed back past most of them without any increase in my effort. Why sprint all-out for 400 yards and then drop into granny ring as soon as you hit the hill? Madness. But then who am I to lecture anyone on pacing?

It was billed as a course for climbers and there was indeed one very big hill (which was as quick to walk as to ride), but somehow it still seemed rather flat. The climbs were a bit dull and, aside from the first muddy slide back down through the woods, the payoff was limited. The level section at the bottom seemed to go on forever, and the endless roots at the far end of the course got on my nerves after a while.

The bloggers and forumites of xcracer.com (the only place to go for XC and endurance racing news, results, reviews, debate, spares and so much more) seem to have loved the course, however. It was proper old skool, apparently. Meaning what - dull? If this was old skool, give me nu XC any day.

Originally the course was supposed to have even more climbing but the descent was deemed too slippery on the day. An interesting decision which kind of says it all for me. The course definitely felt bowdlerised.

Of course, it might have been a very different story in the wet. 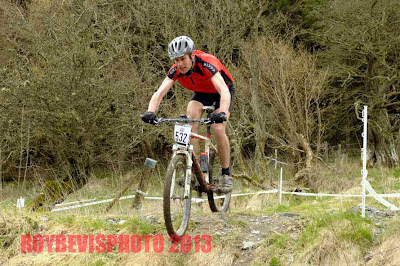 The technical challenges were limited to the likes of this monstrous three foot drop.

As for my performance, I didn't run out of energy, I only hurt myself once and I went pretty much as fast as I could the whole way round, which was faster than most but not as fast as some. Given that the guy I was battling with until I fell off was waaaaay out of my league two years ago, and the guy who finished two places behind me lapped me in Crickhowell last year, I suppose I did quite well. It just didn't feel like it.

Next up, my two big target races for the season: the Dyfi Enduro on 5 May and the Welsh XC Champs on the new World Cup course at Margam Park on 19 May. Can't imagine either of them being flat!