Dyfi Enduro: The kindness of strangers

Having hugely enjoyed the Dyfi Enduro's little brother back in January, I was really fired up for my first taste of the event proper, complete with drummers, aliens and other random mid-Wales nuttiness. While the first and last parts of the route were the same, conditions couldn't have been more different, the course being almost bone dry. Perfect for racing, then.

Of course, only boring people actually race the Dyfi. It's supposed to be all about the laid-back vibe, the banter, the drinking too much beer the night before. Boring sod that I am, though, I did race it - for all of about 20 minutes. 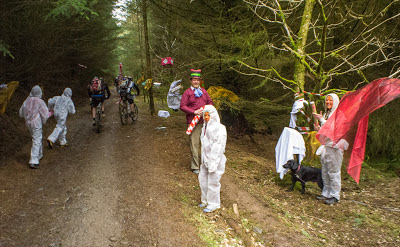 My race lasted the first two climbs and about 20 feet of the first rocky descent. I didn't get off to the best of starts, being too polite to shove all the way through to the front on the start line and then being unable to work my way forward through the motorcade up to Corris (on the singlespeed it was a job just to keep up). Once we were let off the leash on the first big fireroad climb, though, I proceeded to shoot past pretty much all those I consider my peers. I know I always go off too fast up the first hill, but I really wasn't pushing very hard. I felt strong, really strong. I was absolutely on fire. By the time we hit the top of the world after the second climb, I must have worked my way into the top 20.

Then, just 17km from the start, disaster struck as half the air escaped from my rear tyre. Not much of a disaster as disasters go, but it was enough to put me out of contention. A broken axle on my normal rear wheel during the week had forced me to run a more freeride-type wheel as an emergency solution. This proved an absolute bugger to set up tubeless, as the tyre kept popping off the rim, and I think the rim was to blame here on the mountain. The loss of air in itself wasn't that big a deal, though; it was the cack-handed way I dealt with it that was the real problem.

In a perfect world, I would simply have pumped in some air and ridden off, losing no more than three minutes. In reality, I managed to make a mountain out of a molehill and turn this minor setback into five, yes, count 'em, five flats, with maybe 90 minutes lost on repairs and begging for help.

Error #1. Use of pump with known dodgy connector, thus releasing more air and causing tyre to come right off rim, forcing me to remove wheel and insert inner tube.
Error #2. Failure to check carefully enough for thorns before inserting inner tube.
Error #3. Failure to dry tube and tyre carefully enough before patching tube (twice!).
Error #4. Failure to maintain pump, which went on to seize up completely, forcing me to borrow one (three times!).

So, five flats, all self-inflicted. I will learn from my mistakes. 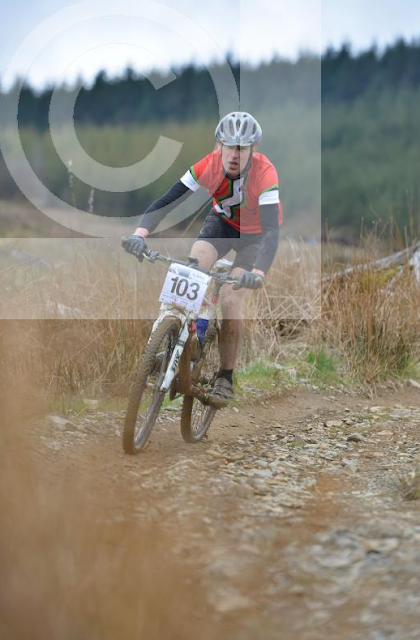 I did enjoy it, honest. Check out the swanky new Team Sarn Helen top, though. Photo: Jon Brooke.

But there were upsides to all this.

First, I was seriously impressed by the number of people offering help as I stood beside the trail, ranting and raving at my upturned steed à la John Cleese. They were genuine offers, too. And I accepted them three times. Twice from the same chap, in fact. A true gentleman. And not forgetting the rider who wanted to give me a tube and really didn't want to take no for an answer! Soppy as it may sound, it was this generosity of spirit that kept me going through some of my darker moments. Thank you!


Second, it is so long since I did a ride just for fun. No Strava, no racing, just a ride. I'd forgotten just how good it can be. (Though obviously I'll still never do it again by choice!) Descending at a sensible pace was strangely rewarding - it doesn't have to be frightening. Only the World Cup descent scared me, partly because it's hellishly steep and rocky and exposed, but mainly because the previously sound guy in front of me started doing some very strange sideways things half-way down...

Third, I got to see how the other half live - the fun-lovin' riders there for the laid-back vibe, the banter, the drinking too much beer the night before. I have to say, though, I didn't actually see that much fun going on other than at the finish. What I mainly saw were people walking or pedalling very, very slowly up hills in a great deal of pain (or was it just trapped wind?) and moaning about congestion, mincers and dangerous overtaking...

With so many lengthy periods of enforced recovery during the ride, I was flying the whole time that I was moving, and the climbs came unbelievably easily. Between my third flat and the feed station, a distance of just 12km, I overtook no fewer than 277 riders! That was a real ego-booster, even though I know they weren't in any great hurry. And of course I then flatted again, twice, so they all went back past. 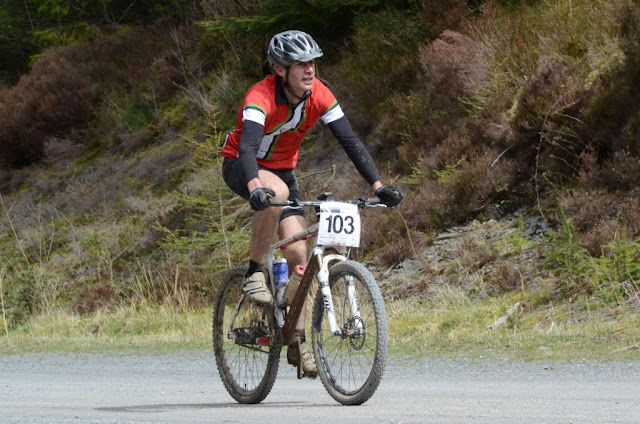 Rare shot of me using the saddle on the singlespeed. Photo: Acejoy


A high-quality video of the event by Will Sanders

I eventually finished in 4 hours and 19 minutes back in 433rd place. The last time I did 60km and 2000m of climbing (the equivalent of climbing Snowdon twice, from sea level) I was left a broken man, but this time I got back feeling just mildly tired and, despite the day's travails, very upbeat. It was a great ride - wild and exhilarating descents linked by endless but uncannily singlespeed-friendly fire-road climbs - with some great people. I will be back! 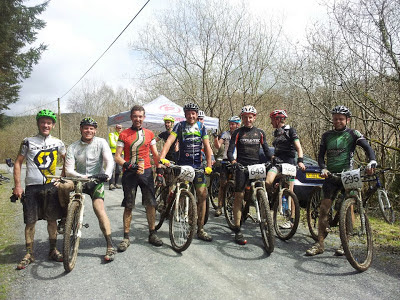 
No Strava today - my Garmin packed up again on the start line...