Welsh XC Series Round 1: The joy of mud-wrestling 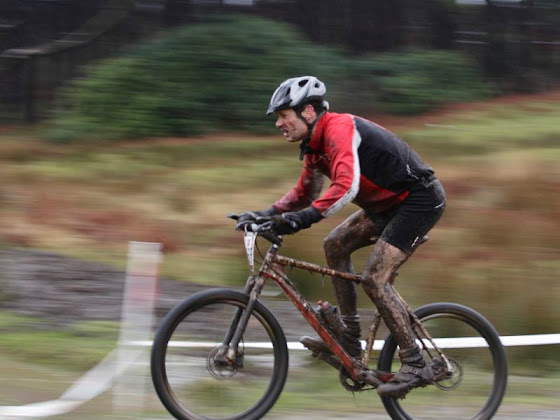 "I think I want to go home now..." Photo courtesy of Craig Fawkes. Visit his blog for a couple of cracking shots of riders flying face-first into the gloop.

But he has a point. Could this be what cross-country mountain bike racing in Wales is all about? Partly unrideable trails, constant drizzle, suicidal descents, mud in every orifice of bike and rider, the day's big luxury a tarmac carpark half a mile from the start. Ticks every box really.

The last time I raced at Margam was the unseasonably dry and sunny Margam Madness 3/6-hour endurance event last September, one of my highlights of 2012. Sunday, then, was payback time. It wasn't biblically wet like the Dyfi Winter Warm Up a fortnight ago, but was probably the closest I will ever get to skiing down a mountain of slurry. Five times.

The course was short at 3.5km but packed in pretty much everything you'd expect from a Welsh XC course: challenging climbs, scary descents, slidey bits, fiddly bits, lots and lots of mud. Tough, muddy and fun.

I started well, pedalling like a demented hamster along a short flat section to keep up with the gearboys, led by eventual winner Mark Spratt and his teammate in what looked like matching kermit suits, and then gained a few places and overtook most of the women on a longish gravel track climb with a nice singlespeed-friendly gradient.

All off-camber sheeptrack and rooty climbing, the first singletrack section was very slippy and a tad vertiginous, and I'd have done better not to even bother trying to ride it. I was on and off the bike, clipping in and out, never getting any balance or rhythm, and quickly losing all the places gained on the climb. Bugger. On subsequent laps I ran or walked most of this section, which turned out to be at least as quick as riding and a lot less hard work.

And then there was the first descent down a straight rocky chute. I knew from last year it would be steep and loose and fast. Only this year it was steep and loose and fast and muddy. Not much to do but sit on the rear wheel and pray, and it wasn't too bad really as long as you started the descent balanced and in control. And that was the problem. Twice I messed up the sharp left turn over a bank into the chute, lost control, couldn't get clipped back in and ended up running down; once I lost control but carried on, careering from bank to bank like I was stuck in a pinball machine; and twice I made it down cleanly. Not a bad average.

Needless to say, one of the times I messed it up was on the first lap. I've come to expect that, though. It always takes me a while to get settled on the singletrack, especially with the pressure of people breathing down my neck. Is it age or inexperience?

Must admit I walked the second climb every lap. Smart move. Not only did it save me energy but it allowed me to enjoy the stunning view of Port Talbot's industrial sprawl, which I've always loved. Like something out of science fiction.

The second descent is hard to describe. The first part is fine, but then you turn left down a steep bank and all hell breaks loose. The combination of mud and gradient mean there's nothing much you can do to slow down. With stopping not an option, all you can do is get your weight back and your heels down, point the front wheel where you want to go, try to look ahead and basically cling on for dear life. Oh, and stay relaxed. Yeah, right. Suspension forks would've made it more comfortable, but I'm proud to say I still made it down unscathed five times, and faster each time until a rather tired final lap. It was absolutely terrifying, and I loved it. 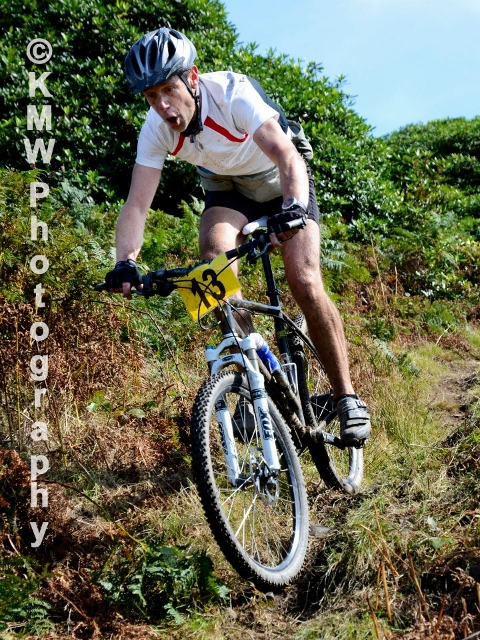 Me auditioning for "Nemo - The MTB Years" on the second descent at Margam Madness in somewhat better conditions last year. Photo: Kevin Morgan-Williams.

The course now meandered back to the start with a couple of short climbs and a really gloopy, rooty, boggy, stumpy, twisty, ditchy new woodland section down to the "arena" (masquerading as a field with two tents and a caravan in it) complete with a cyclocross-style twisty taped section on what was once grass but was now the cycling equivalent of an endless swimming pool.

First lap done, time to do it all again. And again and again and again. Four more chances to improve on the bits I messed up first time around - and find new places to mess up. As usual, the remaining laps were quieter as the field spread out, giving me time and space to deal better with the technical challenges. I seemed to pass people regularly, especially on the first climb, but mainly lapping people in the other categories, as I only passed one other veteran. I finished sixth, which was a great result, especially as the guys in seventh and eighth beat me comprehensively last year. My lap times were pleasingly consistent - all five in 20-21 minutes. I'm now 10% off the pace rather than 20%, so all this training seems to be paying off. I reckon I'm still losing most time on the technical bits, especially on the first lap, so if I could just settle more quickly on the singletrack (or just give up and run earlier), I might just manage to keep up with the big boys next time. I wonder if caged SPDs would help?

Leaving the gears and suspension at home (and the tools, tubes and nutrition at the start) was a gamble that paid off. The 7lb weight saving certainly helped on the push and carry bits, not to mention the climbs, and all the bits I struggled on I would've struggled on with gears (which would doubtless have jammed in the mud anyway). Psychologically there was also that whole underdog thing, which helped me relax more. With descents like that, the dropper post was definitely a good idea, and the Rocket Rons seemed to cling on as well as knobblier rubber on their first outing, besides being Malteser-light.

Event organisers Scott Bugden and Fully Sussed got everything right. We even got lap times the same night. I'm now really looking forward to see what I can do at round 2 at Coed y Brenin on 3 March. Next up, though, is round 4 of the Red Kite XC series at Coed Trallwm. Bring it on! 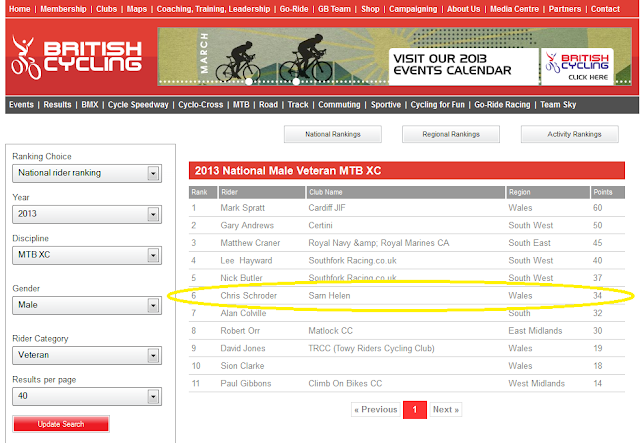