Red Kite Winter XC Series Round 4: Too much too soon 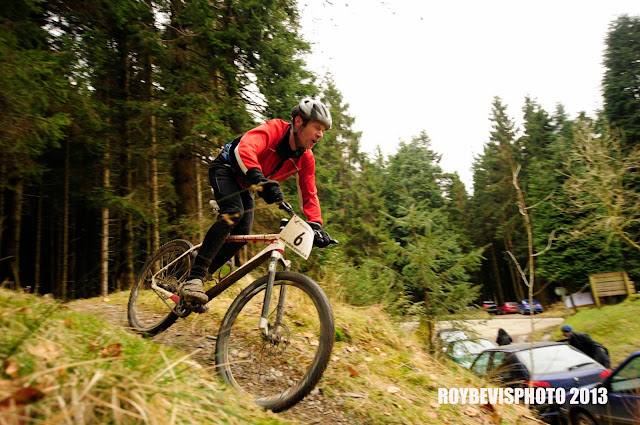 So it was back to Coed Trallwm for a third time this winter, but familiarity hasn't bred contempt. Again there was the all-important warm cafe, and the course, while much the same as round 2, offered a really good balance of challenge and fun - a 5km loop comprising monster fire-road climb, long wild descent and fun easy undulating section. What more could you want?

Highlight of the day for me was the first part of the big descent, freshly cut through the forest for round 2 by organiser Neil Delafield, who clearly confused his XC with his DH and came up with a twisty, turny beast of a section, all stumps and roots and steps down onto a deeply corrugated traverse which was rather like riding on oval wheels, and two bottle-testing drops down steep banks onto fire-road crossings. In round 2 it was all very wet and muddy and slippery, and frankly much of it was beyond me. This time the mud had frozen solid so you could roll the lot, but it had also frozen into ruts that became increasingly difficult to ride in or across as the race went on, polished ever smoother by a thousand slithering tyres. This section was a real test of balance and balls and I'm delighted to report that, unlike many, I didn't fall off once and even cleared it without dabbing a couple of times. Wouldn't fancy tackling it without the dropper post, mind.

I hope this descent is part of the "highlights" course planned for round 5, as I think I might now have the confidence and technique to ride it in the wet. This opportunity to practise and improve is why I much prefer multi-lap races to single loops. 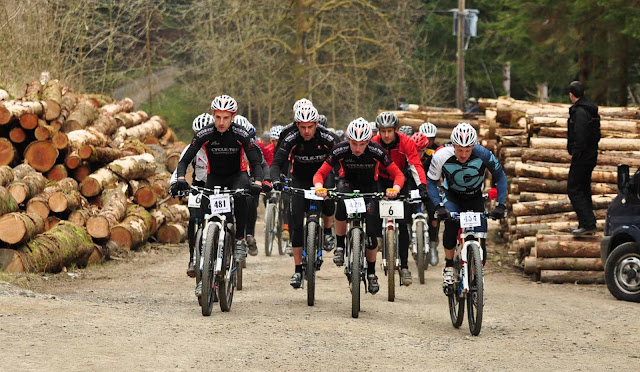 Hanging with the big boys at the start of the first climb. Eventual winner Jonny Pugh on the far left has a lot to answer for. Photo courtesy of Roy Bevis.

So what about my race? Well, the bad news is that I made three big mistakes:

1. I went out too fast. I surprised myself by hitting the top of the big climb right on the wheel of the Cycle Tec riders in fifth place and with a big lead over the rest. Even so, by the end of the first descent I was down to seventh. The second lap was much the same: too fast up, too slow down. By laps 3 and 4 my descending was beginning to come together, but my legs were starting to hurt.

2. I miscalculated the number of laps. I thought I'd finished after four laps, only to find there were always going to be five. And then, because winner Jonny Pugh rather cruelly finished his fifth lap within 90 minutes and just failed to lap me, technically I should have done a sixth!

3. I was on a singlespeed. This race was a salutary lesson in why most people have gears! I think there comes a point in any race when your legs just need a break. Although I did manage to lap one rider while walking up the last hill, Shanks' pony is only competitive on muddy/technical ascents and just didn't cut it against a full set of gears on a fire-road climb.

The good news is that I had my first proper ding-dong battle in a race, regularly swapping places with two other riders for four laps, which was really motivating and good fun. It's a shame that having battled so hard for sixth place I ended up tenth! 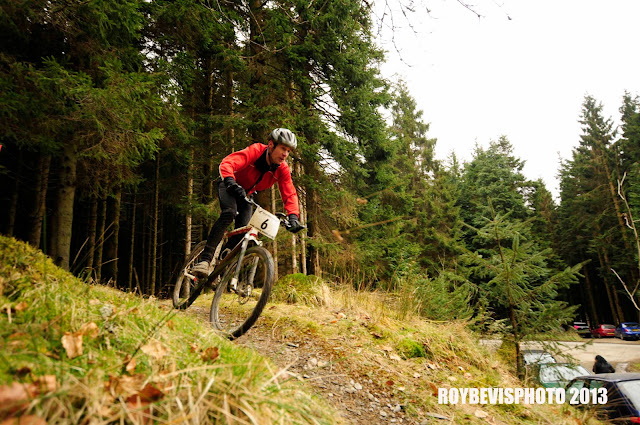 That's more like it, Mole. Photo courtesy of Roy Bevis.

The finale of the Red Kite Winter XC Series is on 17 March and I wholeheartedly recommend taking part. It's more informal and welcoming than the Welsh Cycling series, witness the large number of weekend warriors taking part, but has attracted some top racers too. It boasts a proper cafe rather than just a man in a van in a field, and the courses are a bit more all-weather and rideable for mere mortals. Apparently there was a podium presentation after this round for the first time, but I completely missed it. That's how low-key the whole thing is.

Next stop for me, though, is Welsh XC Series Round 4 at Coed y Brenin on 3 March where I have some scores to settle after last year's gold medal that wasn't.

A pre-ride of bits of the course by Tom Stickland of the very active MB Swindon. Trust me, it wasn't as easy as it looks. The really tricky bit isn't included because his camera fell off - that's how hardcore it was! ;-)