Dyfi Winter Warm Up: Got me all wet

I spent Christmas umming and erring about whether to grab a Ryanair bargain and have a crack at the Lanzarote four-day stage race at the end of January with its promise of challenging climbs, rough-and-ready descents, stunning views, good company and awesome weather:


And then I remembered last year's Dyfi Winter Warm Up and realised that I could have all that and more without having to renew my passport, find a way of cramming 29" wheels into my hand baggage and trawl the Internet for suitably garish gender-bending Lycra. No contest really.


That said, if I'd known just how bloody wet I was going to get, again, I might have had a change of heart. We certainly know how to do weather in Wales, don't we? While at least the trails didn't literally flow this year, it poured it down the whole way up to Corris in the car, it chucked it down the whole way through fettling time, and it pissed it down the whole way out to the forest. At which point, as Sod's Law dictates, the rain stopped, just like that. But by then it was too late.

Despite my best efforts at waterproofing myself, what started as a vague dampness sitting in the car became a steady trickle down my neck on the start line (what would I have given for a sou'wester?) and turned into full-on immersion as we aquaplaned down the main road behind the pace car, dodging confused salmon, the spray flushing away contact lenses, mascara and any last vestige of dryness and warmth and giving one and all instant wet nappy syndrome. It was something like riding a log flume while being hosed down by the fire brigade, at the south pole. By the time we reached the forest I was soaked to the bone, if not beyond, shivering uncontrollably, speaking in tongues and feeling utterly miserable. Next year I take a wetsuit. 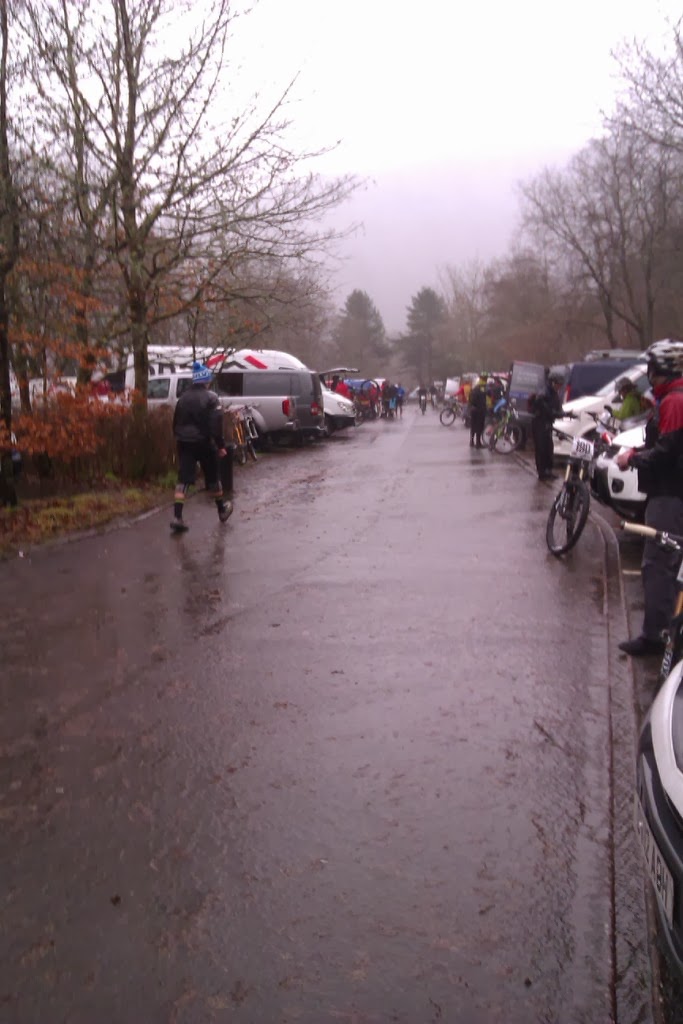 Rain pretty much stopped play in terms of pre-ride faffing. The naked man had stopped running around by the time I took this.

Luckily the course starts with a 250 metre climb. That's not a sentence you'll hear very often. And for the record, that's 250 metres of altitude gain (which is quite a lot). It's a steady climb, though, spread over about 2½ miles, and there was a tailwind, and it was just the ticket to warm you up, like a nice cup of cocoa and fluffy novelty slippers fresh off the radiator. Kind of. Anyway, I didn't feel cold again until the finish line, when I reached for a flapjack and it was like somebody flicked a switch, and I was a-shiverin' and a-quiverin' all the way back up the road to base camp and for some time afterwards.

The course was a variation on those of previous years, a little longer than last time but still somewhat shorter than advertised. Caff-to-caff it was 42 km, but ignore the gentle lead-out and the pootle back and the actual course for those doing the full distance was only about 33 km, taking the fastest riders just over two hours. This makes the event more XC than endurance, so you can just go hell for leather and not have to worry much about pacing and nutrition, which is a Good Thing. Also, unlike the Dyfi Enduro proper in May, which is one big loop, the Warm Up is three laps of a shorter loop. (Strictly speaking it's more like a lollipop with two sticks where you go up one stick and then round the sucky bit almost three times before heading down the other stick, only the start is a little way up the first stick, the finish is just before you get to the second stick, and on a map the course looks more like a toddler's random scribbling than a two-sticked lollipop. Got it?) This format gives you the chance to get to know the descents and lap people, making you feel like a full-blown riding god by the end, albeit with growing tiredness presenting a very real risk of the Welsh slate then puncturing your overinflated ego. 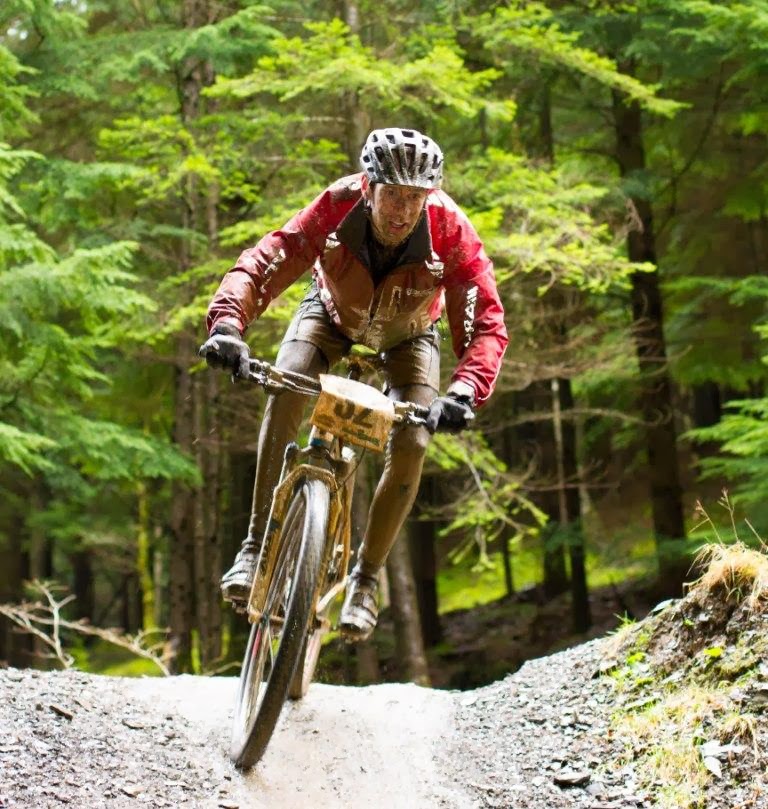 Despite it having rained for forty days and forty nights, the course was in remarkablly good shape. Yes there were plenty of puddles, and yes there were numerous official and unofficial stream crossings, and yes there was a fair bit of mud about (much of it attached to me by the finish), but the trails in the Dyfi Forest are generally a pretty free-draining bunch and held up well. Everything was rideable, both uphill and downhill, bar a short, sharp bedrock climb that has always beaten me in the dry anyway.

I'm proud to say that I led the race from the off. Unfortunately, this lead was rather short-lived, as I was passed after only 50 yards by eventual one-two Phil Morris and Matt Page. I'd hoped to stick with Matt on the climb after the Frozen Devil earlier in the month (what with now having 30 times more gears), but Phil is a top XC racer and set off at a fearsome pace. Matt went with him, but I decided to hold back (the Warm Up may be only 20 miles but it's a tough 20 miles) with a couple of other riders. The long drag up to the top (the 250 metre one) takes around 15 minutes in the dry, a couple more in the wet. The front two gained maybe a minute by the top and I never saw them again. I in turn had a small lead on a guy in blue and a biggish gap on a couple of others. 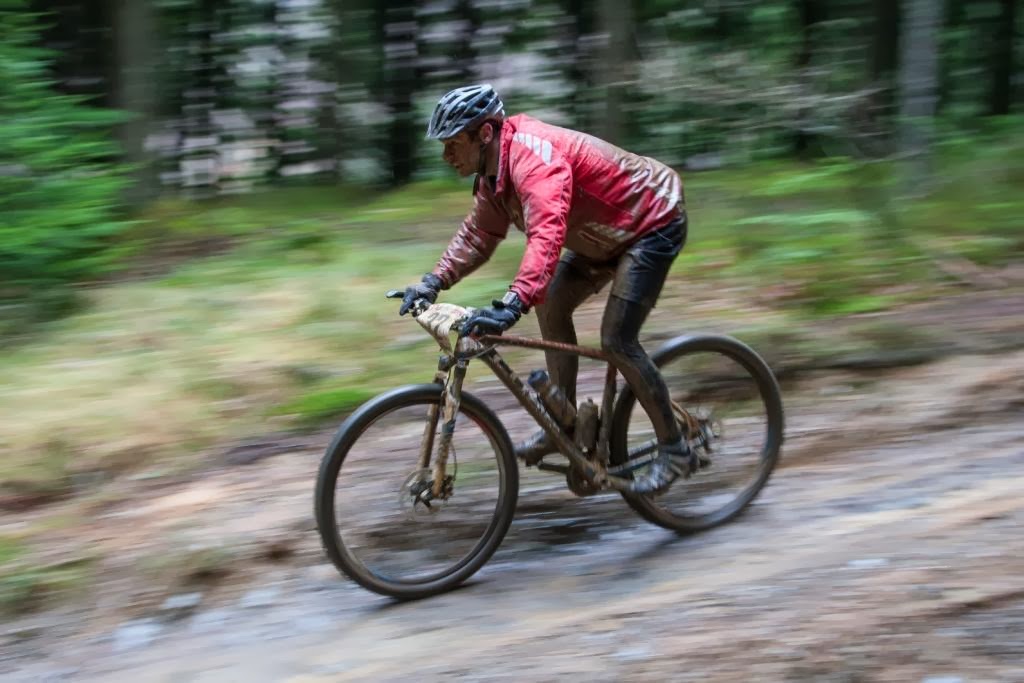 At least we didn't have to worry about dehydration.
Photo by Mark Wood.

I was expecting now to drop back down onto the main loop of the lollipop on one of two descents used in previous years, but there was a twist this year as we immediately headed even further up on a section of undulating singletrack from the Climachx MTB trail, ridden backwards. Well, not literally backwards, you know what I mean (but there's an idea if I ever do get round to organising an event). It didn't go much higher really, but it was hard work on legs already burning from the fireroad climb. Thankfully it led onto a never-ending descent. Yay! The top part was new to me, fast, rough, typical Dyfi. The middle section was familiar enough for me to know there was a big hole worth avoiding; I still contrived to pile straight into it, but managed to cling on. Note to self: Learn to bunnyhop! The last part was the famous Builth descent - fast swoopy curves, stream crossing, slickrock corner, loose rocky dash to the bottom. Fabulous, darling. Despite my best efforts, the rider in blue caught me right at the end, so I pushed hard up the next climb - and never saw him again. Result!

I don't remember it being as wet as it looks in this nice headcam footage of the two big descents by Ian Edwards but I suppose it must have been.


Soon after that, though, I rashly decided to challenge the routing of the trail by bulldozing my own line off to one side. With my head. A tree stump had other thoughts. Ever wondered what actually happens when unstoppable force meets immovable object? Well, you see stars, lose an inch in height and have headaches all week, but you don't bloody well stop when you're racing. You get straight back in the saddle and press on!

Sadly this bravery/stupidity was not enough: at the bottom of the next big descent (Dicko's 3-in-1) I was caught by another rider, Sean Grosvenor. Cue something of an epic battle for third place for the rest of the race. We were well-matched: I had half a minute on him on the climbs; he had half a minute on me on the descents. And we made a good team parting the Red Sea of back-markers on the last lap, Sean calling "Riders!" and "On your left/right!" and ploughing straight through, me calling "Thank you!" as I followed in his wake. I have to say I felt much more comfortable in the Good Cop role, as I wouldn't normally have the nerve to barge through like that. I do apologise if we upset anyone!

Two things made the difference between us in the end. First, I had a minor mechanical problem when my front derailleur stopped responding due to a freak cable failure. Stopping to investigate this and manually set the bike up in the middle ring lost me all the ground I'd gained on the preceding climb. 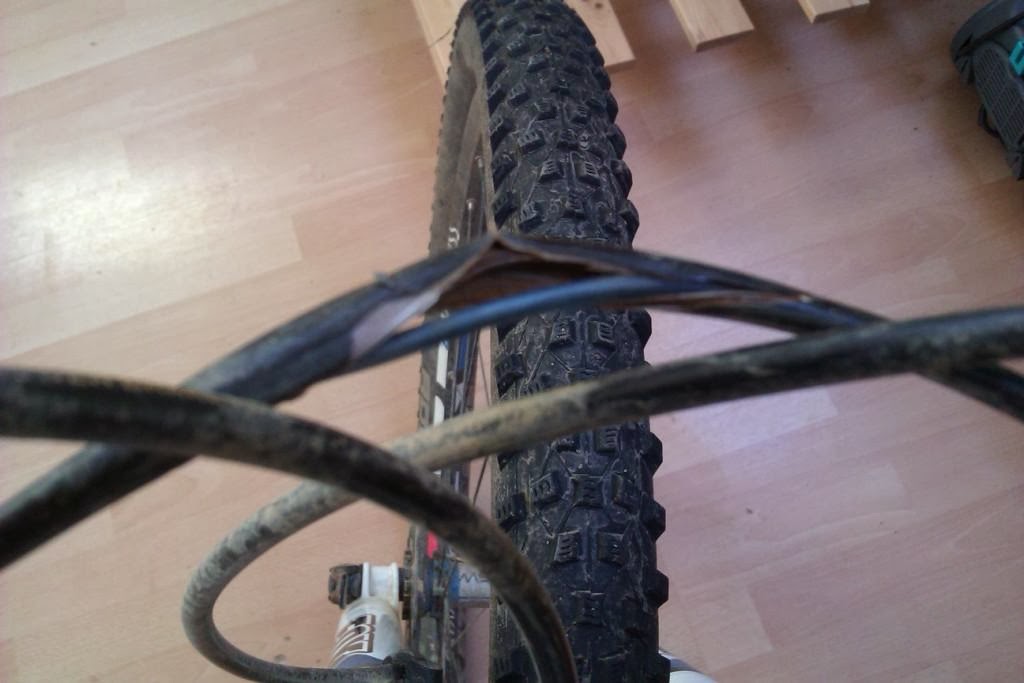 I believe the technical term for this is "buggered".

Second, I made the mistake of doing a gentlemanly thing when we approached a descent more or less together and I let Sean go first. I could, perhaps should, have stayed in front and held him up down the narrow descent before pulling away up the next hill. But that kind of Schumacher tactic doesn't come naturally to me so instead I tried to follow him down the descent, which went pretty well - until I fell off. That basically gave him a 100 metre lead starting the final hill, and I just didn't have the strength to close that kind of gap before the final descent, so fourth place it was.

What with this not officially being a race, there are no official times, but I've managed to cobble together the following results based on Strava and hearsay:

Assuming I haven't miscalculated, then wow - I'm really beginning to mix it with the big boys. Last year I finished 11th; two years ago Matt Page lapped me. Strava tells me that I was 1-2 minutes quicker than last year on every climb and, more amazingly, 1-2 minutes quicker on every descent. While I have to give the bike some credit, I think it has more to do with bigger balls than bigger wheels. Which can only be a good thing. 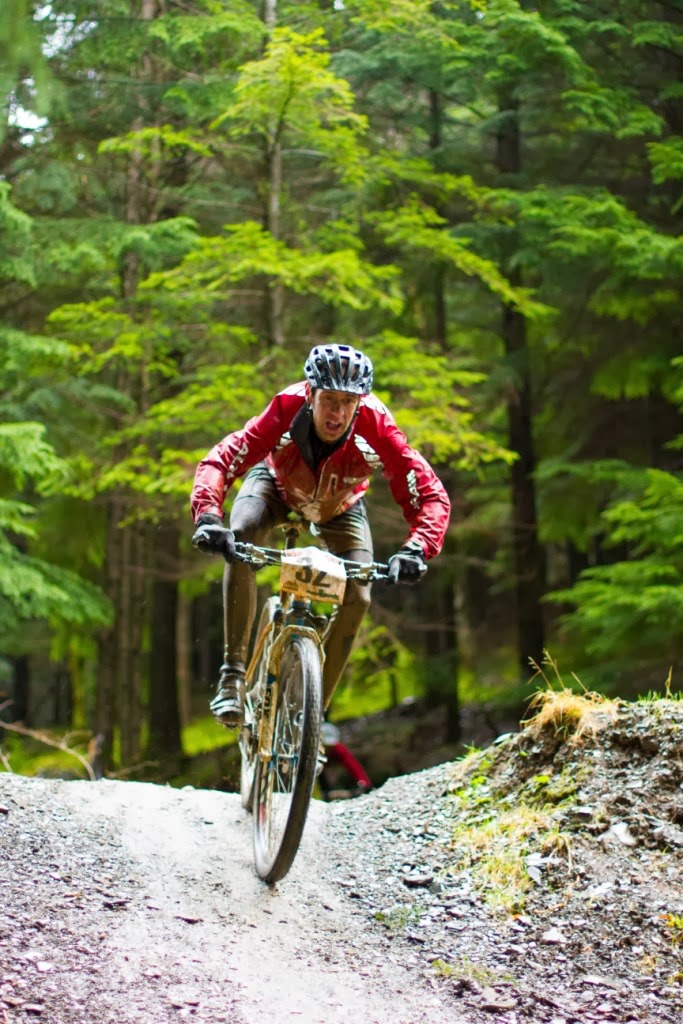 Being chased down by Sean Grosvenor - again.
Photo by Dan Wyre.

Despite the initial soaking, my third Winter Warm Up was as much fun as ever. Top trails, a friendly, laid-back vibe, plenty of man-against-the-elements camaraderie, a good result, a proper carpark and a nice warm café - they just needed to unblock the drain in the gents as we might as well have pissed straight on the floor. Good job I'm not as German as my surname - it was not the place for socks and sandals...

Fingers crossed I'll be back for the Dyfi Enduro proper in May. All 800 places normally sell out in about 20 minutes and entries open in less than two hours - time for me to stop rambling and go set a couple of alarm clocks!