Red Kite Winter XC Series Round 5: This is the end, my friend

I've tried very hard to take some positives out of this one - and failed. So I didn't hurt myself or break the bike or come last. But the balance of the course wasn't quite right and nor was I. 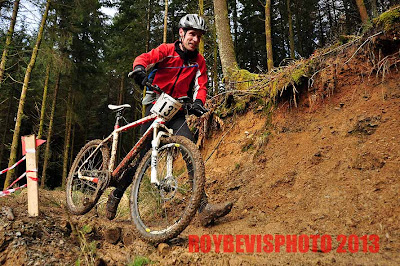 This rather sums up my race: running a section that was perfectly rideable while grinning inanely. Photo courtesy of Roy Bevis.

The course was much the same as Round 4, which I enjoyed hugely, but with a few significant tweaks. We were warned at the start that parts "wouldn't be out of place in a downhill race" - and unfortunately that was no exaggeration. I've previously been a fan of Neil Delafield's little cheeky techy trails cut specially through the forest for each round of the series, but this time he went too far.

Downhill racers are raving lunatics with balls the size (and possibly texture) of coconuts and no trace of a hint of a sense of fear - and they still wear full-face helmets and body armour and ride bikes built like two-wheeled monster trucks.

I, on the other hand, am a middle-aged XC wuss with mild vertigo issues, a bike made of fairy dust and a keen instinct for self-preservation. The descent this time was beyond me.

Maybe I would've made it down if I'd been in better physical and mental shape and the ground had been bone-dry (er, hello, this is mid-Wales), but rain during the week left us sliding on a greasy layer of gluey wet stuff over a loose layer of sticky drier stuff (given that the Eskimos have 50 different words for snow, you'd have thought the Welsh would have at least that many for mud) with the exact consistency required to turn knobbly tyres into slicks and make clipping back into SPD pedals a case of square pegs and round holes for the duration of the descent.

This reminds me, obliquely, of my one and only visit to a homoeopath, whose first question was: "How would you describe your stools?" Of course I should've said: "Three-legged." But even after I got over the shock I remained at a loss for words - and I make my living as a linguist. OK, this was partly because I don't really take much of an interest in my, er, waste (despite the German surname, we don't have a loo with a viewing shelf), but there are some things the English language just isn't equipped to describe. 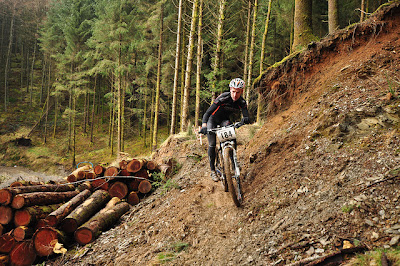 Winner Jonny Pugh striking a pose on the bit I ran above. Photo courtesy of Roy Bevis.

I digress. Yeah, this hill, right, it was bloody steep. And to add insult to injury, the guy at the bottom clearly hadn't been to Marshal School. Four times I passed him on bike or on foot, and not a single cheery, encouraging comment was forthcoming. Perhaps he was mute, I hear you say. But each time he also looked at me in a way that said, unequivocally, "I hate you, you big XC ponce, and I want to eat you."

Now I'm not averse to a bit of mud and a bit of running in an XC race, indeed it favours me. I'm also under no illusions about the limitations of my technical riding, but I got the impression that the descent was beyond most of the other riders too, and that even those who could ride it didn't. To be honest, even if it had been rideable, it would still have been a shame to lose so much height so quickly. The previous rounds' formula of a fast, flowing descent with short tricky bits was much more rewarding. 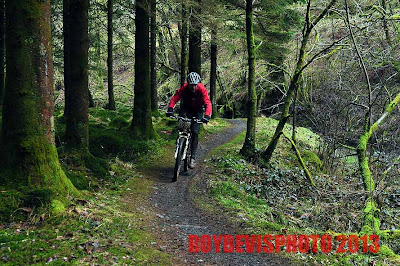 The smooth, surfaced trail down by the river. Undemanding but fun. Photo courtesy of Roy Bevis.

However... I must stress that I am very grateful to Neil and his crew of helpers and to Coed Trallwm for staging this series. I hope it becomes an annual event and I will be back every time just as long as they don't lose sight of who is riding these races - and it ain't downhillers - and remember that we want to be challenged rather than beaten by the course.

Of course this race was supposed to be the Big Decider for me in terms of singlespeeding or adding gears, but I didn't feel right at any point so it's hard to draw any conclusions. I still had sore ribs from Coed y Brenin and lacked energy and balance throughout. I lost all the people I considered my peers within a lap and a half, and I was walking bits of the climb on the second lap FFS. I coulda/shoulda/woulda stopped after three laps but decided to trudge up the hill for one last shot at some of the technical bits, only to find I was now too tired to go down (insert smutty comment of choice) as well as up.

Not sure whether I'm run down from overworking or overdoing it on the bike, or maybe it's this nagging piriformis injury (a right pain in the arse, boom, boom). Either way, I'm going to tone it down a bit for a while and just go out for fun. Might even turn off the Strava (gasp!).

I'm postponing any decision about gears as well. I have no races until 21 April anyway. Next event I have planned is another Delafield production - a long, slow Devil's Challenge in Llanwrtyd Wells on 7 April. 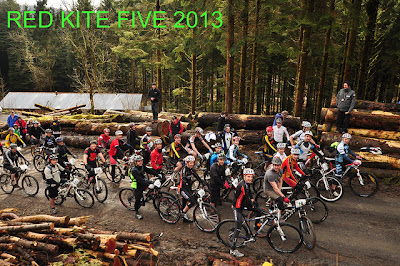 Totally uncontrived shot of the start. I hope we line up again for another series next year. Photo courtesy of Roy Bevis.